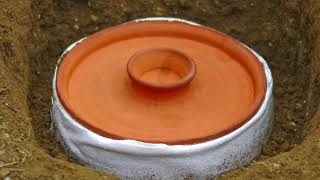 The fifth procedure was complicated and took a lot of preparation. The next and sixth procedure, the 'reviving' (Sanskrit: nirodhā) of mercury, is much simpler and takes little work. The term nirodhā normally means 'restraint' or 'suppression'. However, in this context, it is understood as a synonym for 'bodhana', 'awakening'. Some texts call this step 'bodhana' others nirodhana, or rodhana. In all texts, the purpose of this procedure is to reinvigorate the mercury after its potency has been weakened with the foregoing cleansing procedures. The Rasahṛdayatantra states:

It is rendered useless through trituration, thickening and condensation because of its weak potency. Once it has become replenished through revivification with sṛṣṭyambuja (water and salt?), it will no longer be impotent.

The term sṛṣṭyambuja, reiterated in a number of alchemical works, presents us with some problems. I initially translated it as 'watery emissions', i.e., emissions (sṛṣṭi) that are produced by water (ambuja). However, that did not really give an idea of what it was. Some later alchemical texts (for example, Rasaratnasamuccaya 8.65 and Rasaprakāśasudhākara 1.63) describe the use of salt and water for this step. Indeed, the Rasaratnasamuccaya describes the procedure twice, once (8.65) giving salt and water (jala and saindhava) and once (11.48) using sṛṣṭyambuja. However, it is a bit of a leap to translate sṛṣṭyambuja as salt and water. The Mugdhāvabodhinī commentary on this verse of the Rasahṛdayatantra dismisses the translation of ambuja as either 'salt' or as 'lotus' ('lotus' is actually is never proposed as a solution in any alchemical work). Instead, it quotes a work called the Śaktyavatāra, in which sṛṣṭi is defined as the urine, semen and (menstrual) blood of cattle, goats, sheep or humans. This actually leaves ambuja untranslated. In any case, no alchemical work spells out the use of these substances for use in the reviving process. We asked some of our rasashastra experts and they all agreed it should be salt water or sea water ( my special thanks to Dr Trupti Patil-Bhole, Assistant Professor at the Dept. of Rasashastra Bhaishajyakalpana of the BVDU College of Ayurveda in Pune, who pointed me to the Rasaratnasamuccaya passage).

We were tempted to try it out and see what difference it would make to steep the mercury in urine, blood and semen. Andrew can get cow urine from a neighbouring farmer. The other substances would have been trickier to source... In the end, given that water and salt is attested in a number of works, we decided to go with that. Sometimes, you just want an easy life.

So then, for this step, you place the mercury into an earthen pot with salt water and leave it there for three days. Well, the Rasaratnasamuccaya says earthen pot and three days. The Rasendracintāmaṇi (3.31) suggests using a coconut (if that is what a viśvāmitrakapāla is) or a glass bottle (kācakūpa). The Rasahṛdayatantra gives no information on how to proceed. According to some, the pot should be buried. We did that, for good measure. The main difficulty in this procedure then lies in getting rid of the salt at the end of it. Andrew used a vinegar wash to achieve this, and it took him a number of repetitions. You may have noticed that he has used vinegar to retrieve mercury from the various vessels or to wash the mercury at the end of each step. This is something that is not mentioned in the Rasahṛdayatantra, but that Andrew learned to do when he studied rasashastra in Sri Lanka. We hope it doesn't change outcomes too much.

Here is the film of the procedure: