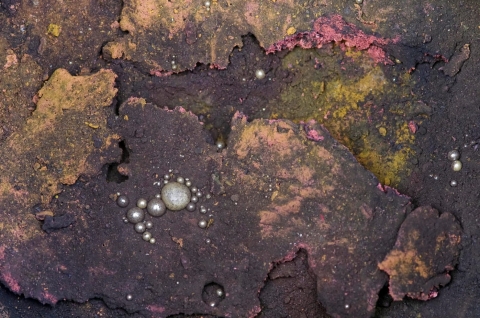 Nine months into this experiment, we have arrived at the fifth procedure: pātana. This procedure is meant to rid the mercury once and for all of any residual amounts of tin and lead, which are understood as contaminants that render mercury poisonous. The procedure involves preparing a copper-mercury mixture. That is, the text only speaks of a copper paste (śulbapiṣṭi) and we can only infer that this paste must contain the previously processed mercury.

Having prepared a copper paste, a condensation procedure is conducted because of suspicion of remaining lead and tin. And, freed of its faults in this way, the cleansed mercury condenses.

This short description hides a rather large amount of work. Making a paste of copper and mercury takes time, and yet again, elbow-grease. In the previous films we showed ways of preparing copper, readying it for admixture with mercury. Andrew made these copper preparations in April. Then he began preparing the copper-mercury paste, and this has taken him up to the beginning of July. You add an amount of copper to the previously processed mercury. Eventually, with many hours of stirring and grinding, the copper is absorbed by the mercury. The colour of the mixture goes through stages: at the beginning, it looks a bit like bronze, or even gold. Then, it turns back to mercury's silvery colour with the consistency of a buttery paste. Some of the alchemical texts describe mercury as having a mouth that devours the substances fed to it. Seeing the gradual absorption of copper into mercury, one can easily understand how this imagery developed. 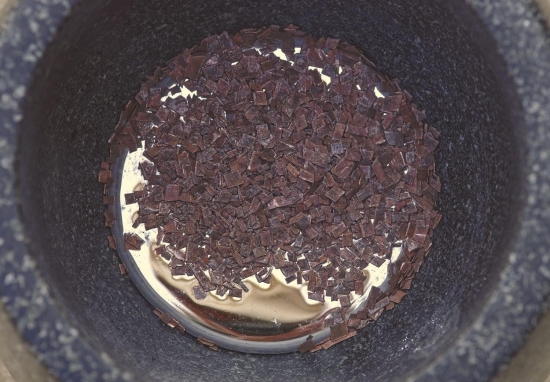 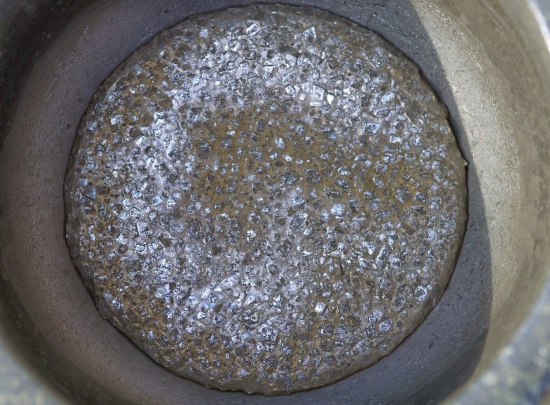 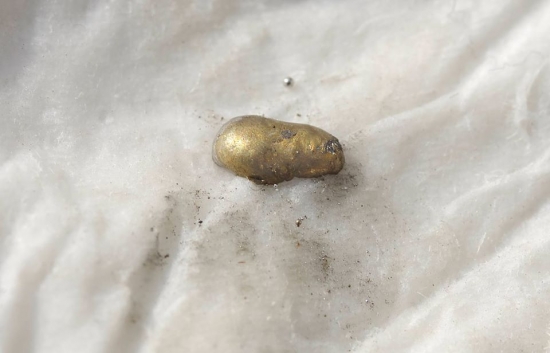 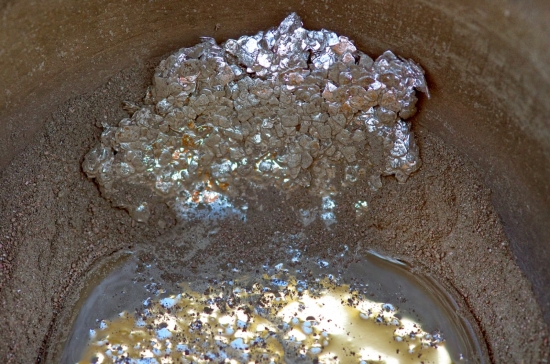 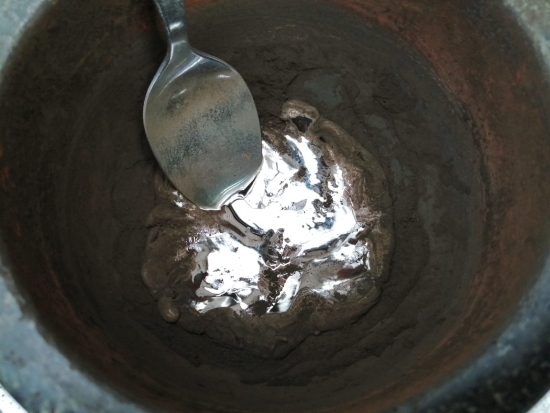 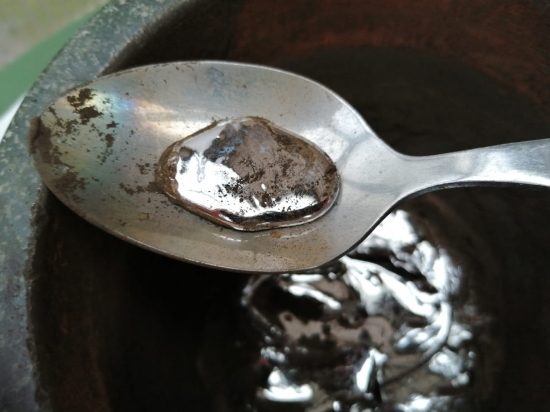 Since the text gave no indication of ratios, Andrew tried to achieve a paste-like state, gradually adding more and more copper. He ended up with a ratio of about 150 g of copper to 700 g of mercury.

Perhaps a word on my rather inelegant rendering of the Sanskrit term for this procedure, pātana as "letting fall". Well, it's grammatically correct, and this procedure does involve causing the mercury to fall: After it has first been heated so that it evaporates, it meets with the relatively cooler top vessel of the condensation device (pātanayantra) and codensates. Perhaps I should just go with "condensation" for this procedure? "Sublimation" isn't quite right, as sublimation is the transition of a substance directly from the solid to the gas state, without passing through the liquid state. The mercury in the copper paste is not exactly solid. Distillation perhaps fits better, as it describes the conversion of a liquid into vapor that is then condensed back to liquid form. It is also a process of separating components of a mixture based on different boiling points, and this is what happens in this step. The copper and mercury paste separates into liquid mercury and copper through the heating.

All that work making them into a paste, undone in the few hours the distillation takes! 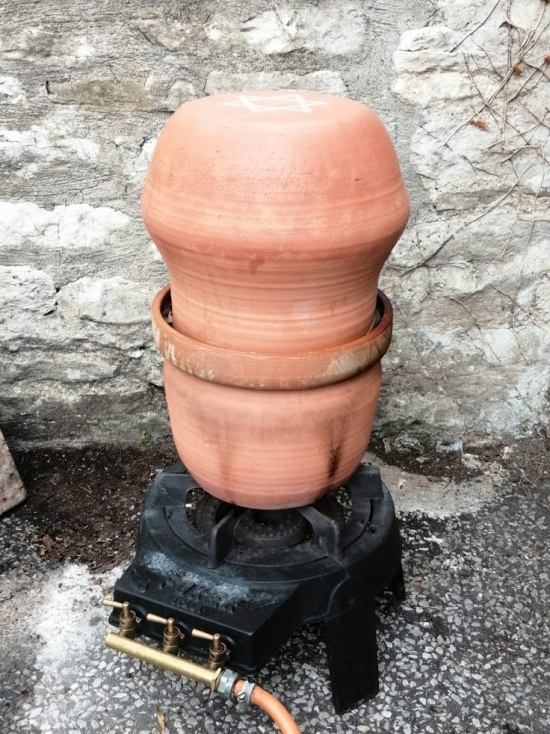 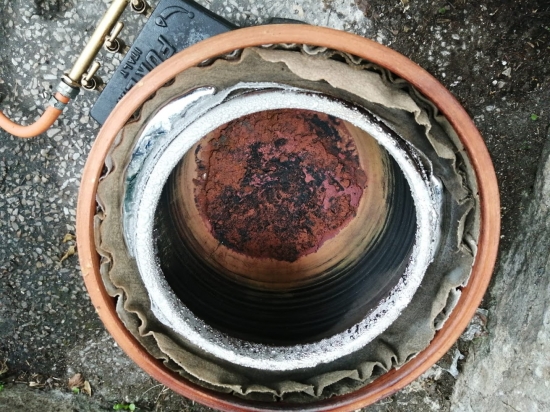 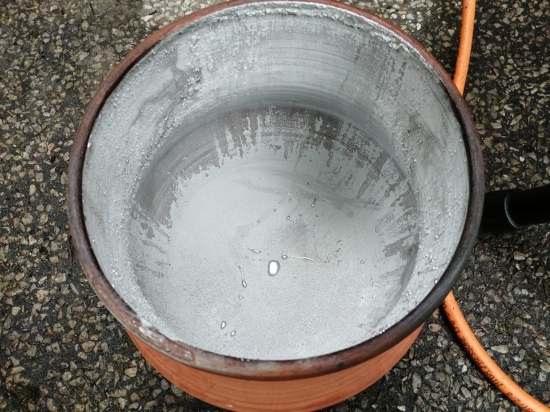 At this stage, mercury is considered clean and free of contaminants and toxins, though it is also thought to be in a weakened state. Or at least, this concludes the fifth procedure in the version of the text edited by Trikamji Acharya, which we are using. In the edition of the Rasahṛdayatantra by Shastri, there are a few extra verses, and these add several more steps to the fifth procedure. These are the extra verses (you can find Shastri's edition of the text in the Digital Corpus of Sanskrit):

8. Having prepared a copper paste, a condensation procedure is conducted because of suspicion of remaining lead and tin. And, freed of its faults in this way, the cleansed mercury condenses.

10. With the rim of the lower vessel on the inside, a flat[-topped] jar that is sixteen fingerbreadths wide should be placed on top, the edge of its own rim sunk into the water.

11. The mercury will condense in the upper vessel. Freed of all flaws it can be applied extremely well as a reagent and in elixir regimen.

12-13.1. And, having produced a deadened paste, one should smear it together with the three myrobalans, leadwort, moringa, mustard seed and salt into the upper vessel and distill it downwards with burning cow pats.* Otherwise, after it has been distilled in a ‘lamp-device’ (dīpikayantra), it is free from all flaws.

13.2 Mercury should be distilled according to the method of transverse distillation.

14. Place finely ground mica sheet, mixed with mercury and sour gruel into a mortar. It is rubbed until it becomes a deadened paste (naṣṭapiṣṭa).

15. [This is how] one should produce mercury that is distilled through transverse distillation. Having gradually caused it to evaporate on a steady fire, it is distilled. It does not condense as long as there is a steady fire.

As you can see, this is rather more involved than the version in Trikamji Acharya's edition. The extra steps are attested in later texts: They are, for example, featured in the Rasaratnasamuccaya (chapter 11, verses 34-43). It is, however, not clear what manuscript evidence there is for these extra verses in the Rasahṛdayatantra, and we decided at the beginning to stick with Trikamji Acharya's version for this experiment. However, Andrew wanted to try the procedures out, and had the devices made. They are almost ready for use, and we will get back to these procedures. Andrew will keep some of the processed mercury back for this purpose. However, for now, we will move on to the next step, the "reviving" of mercury.

And here is the full film of the fifth procedure: 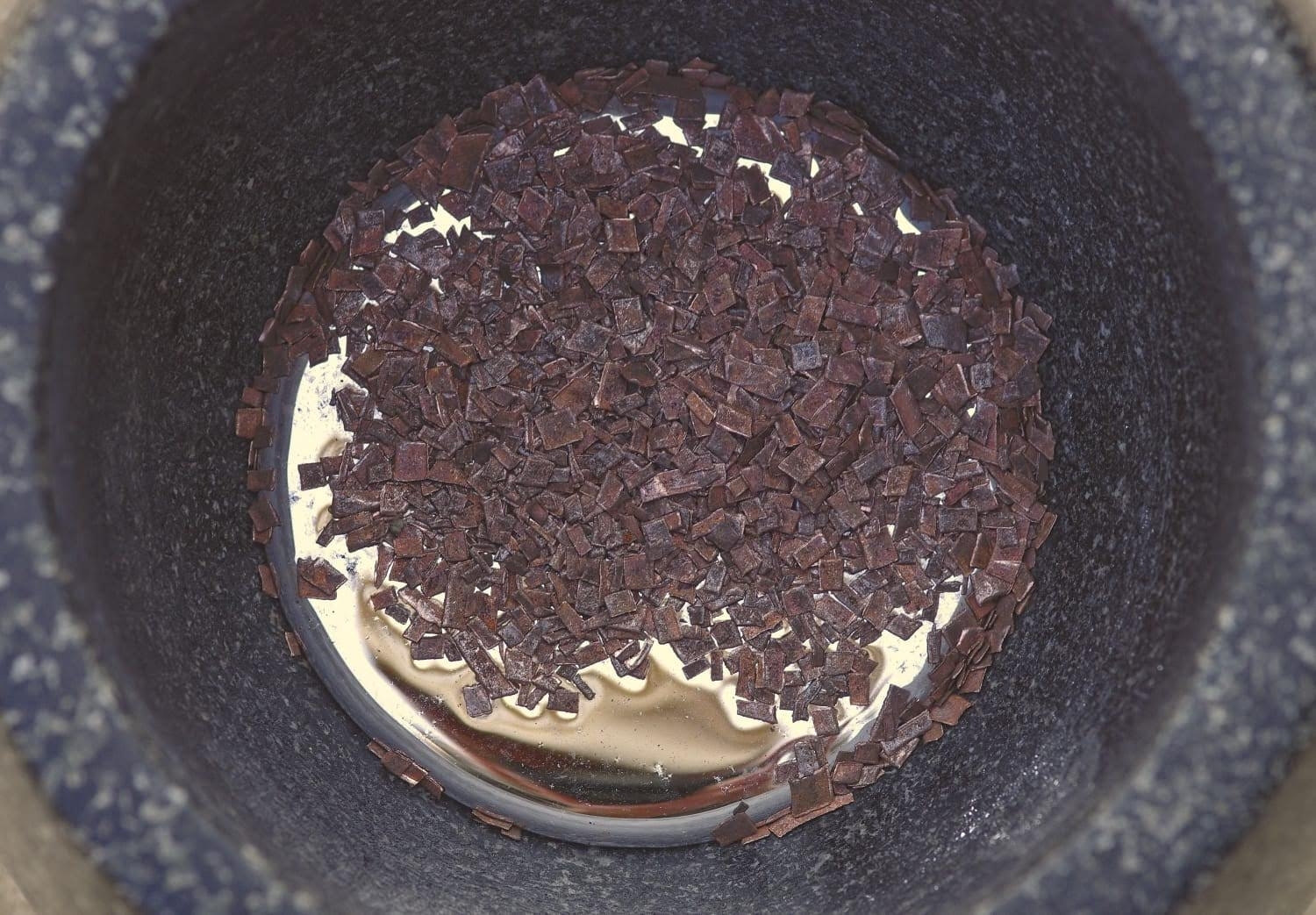 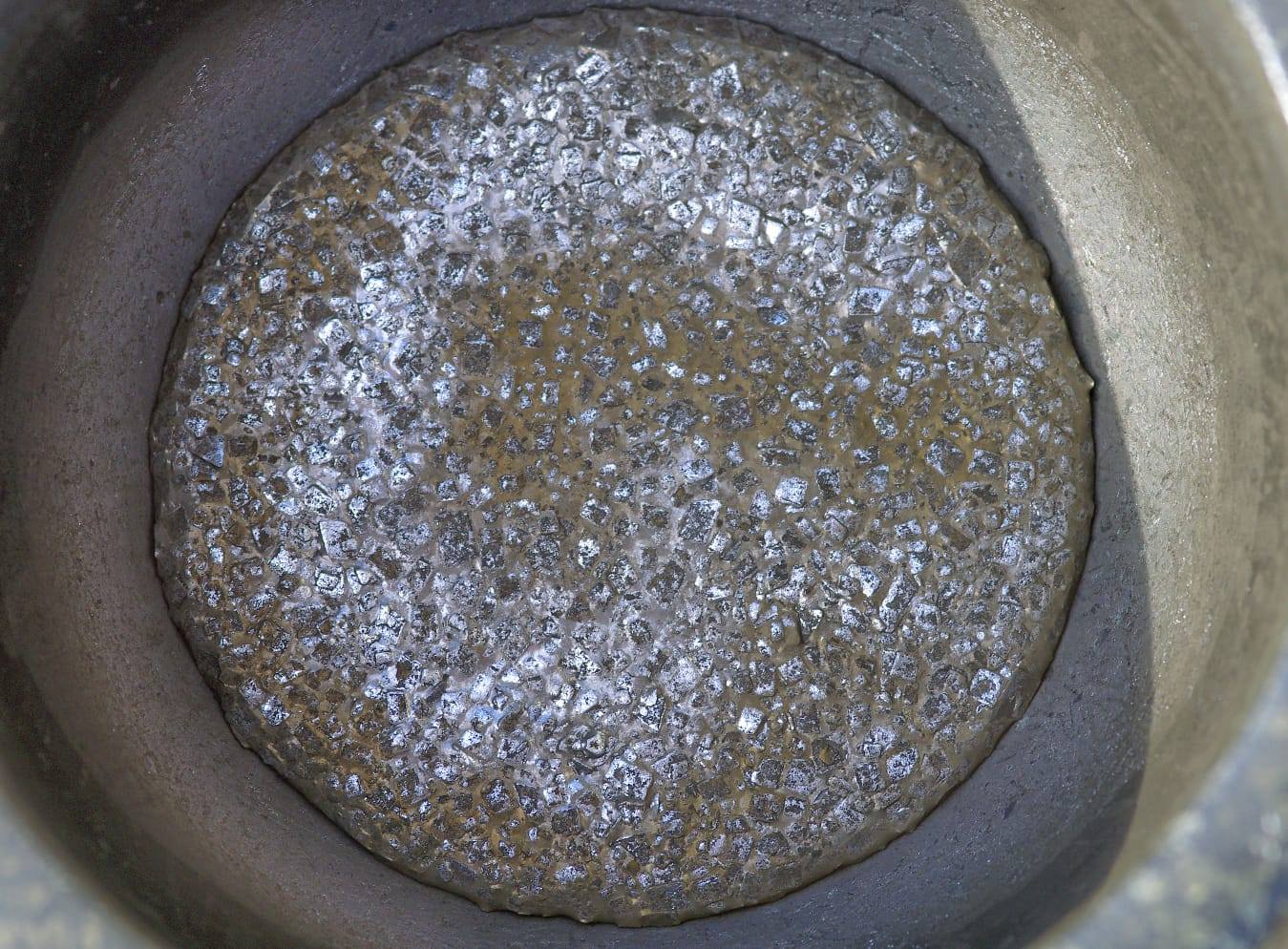 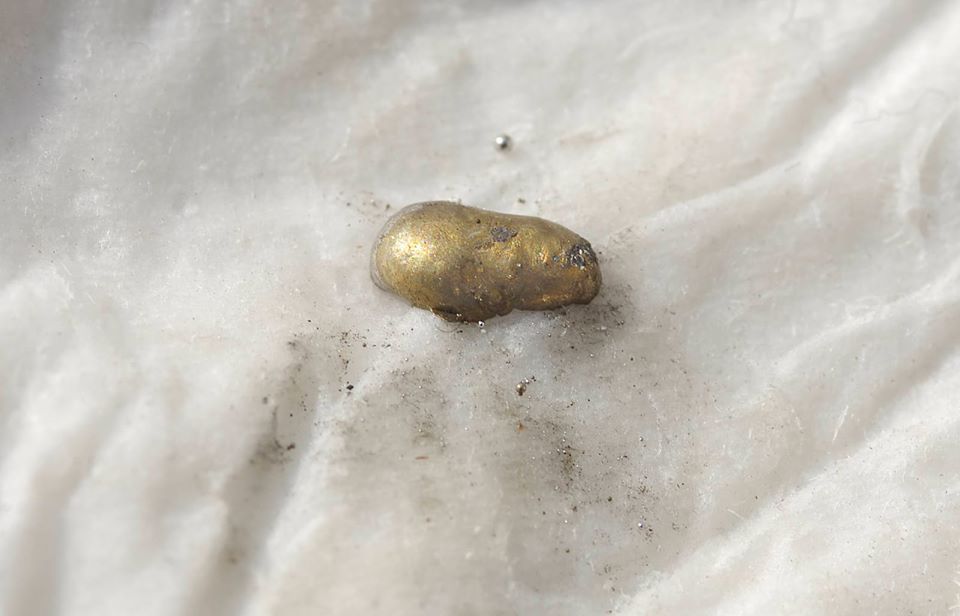 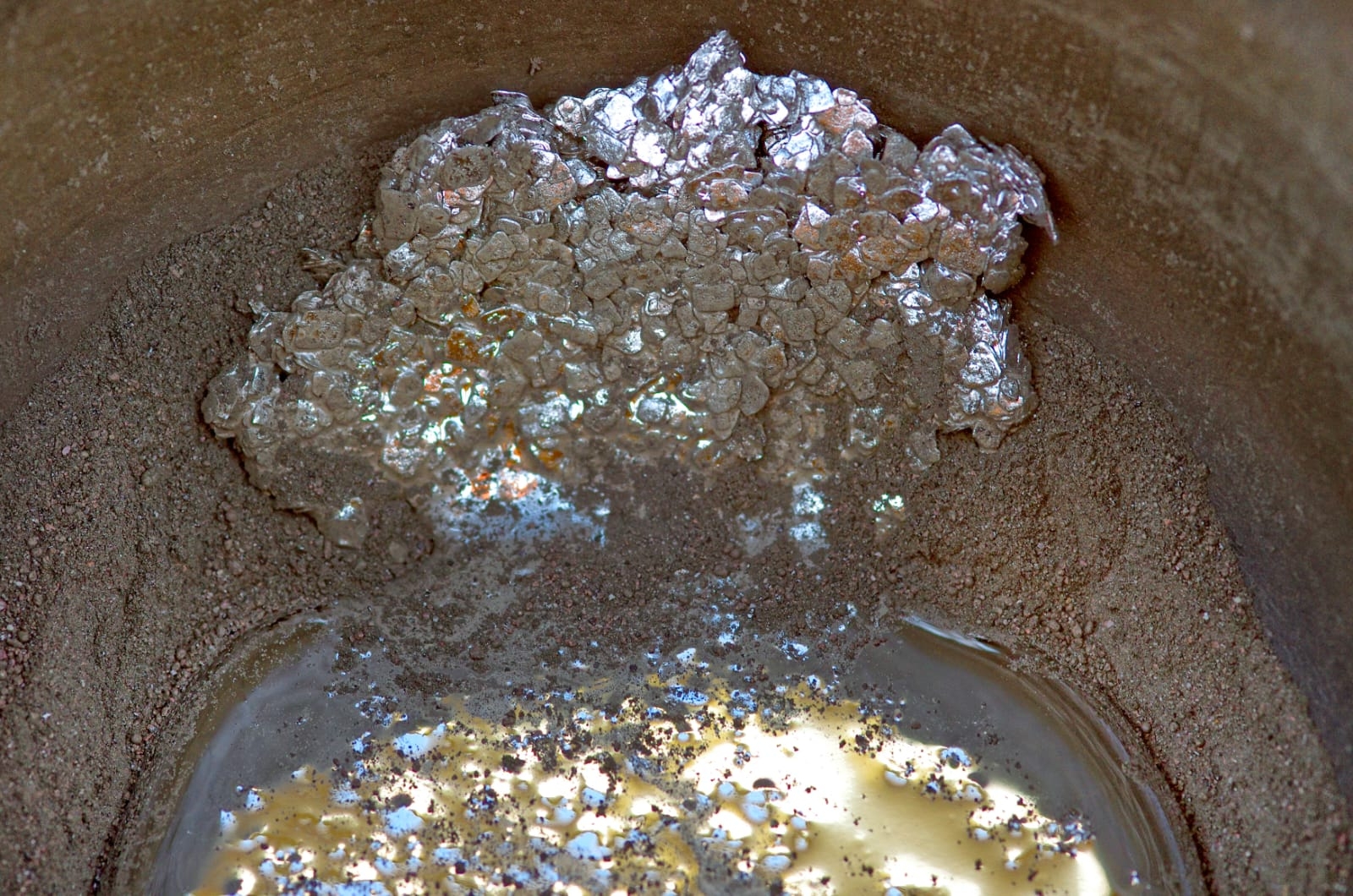 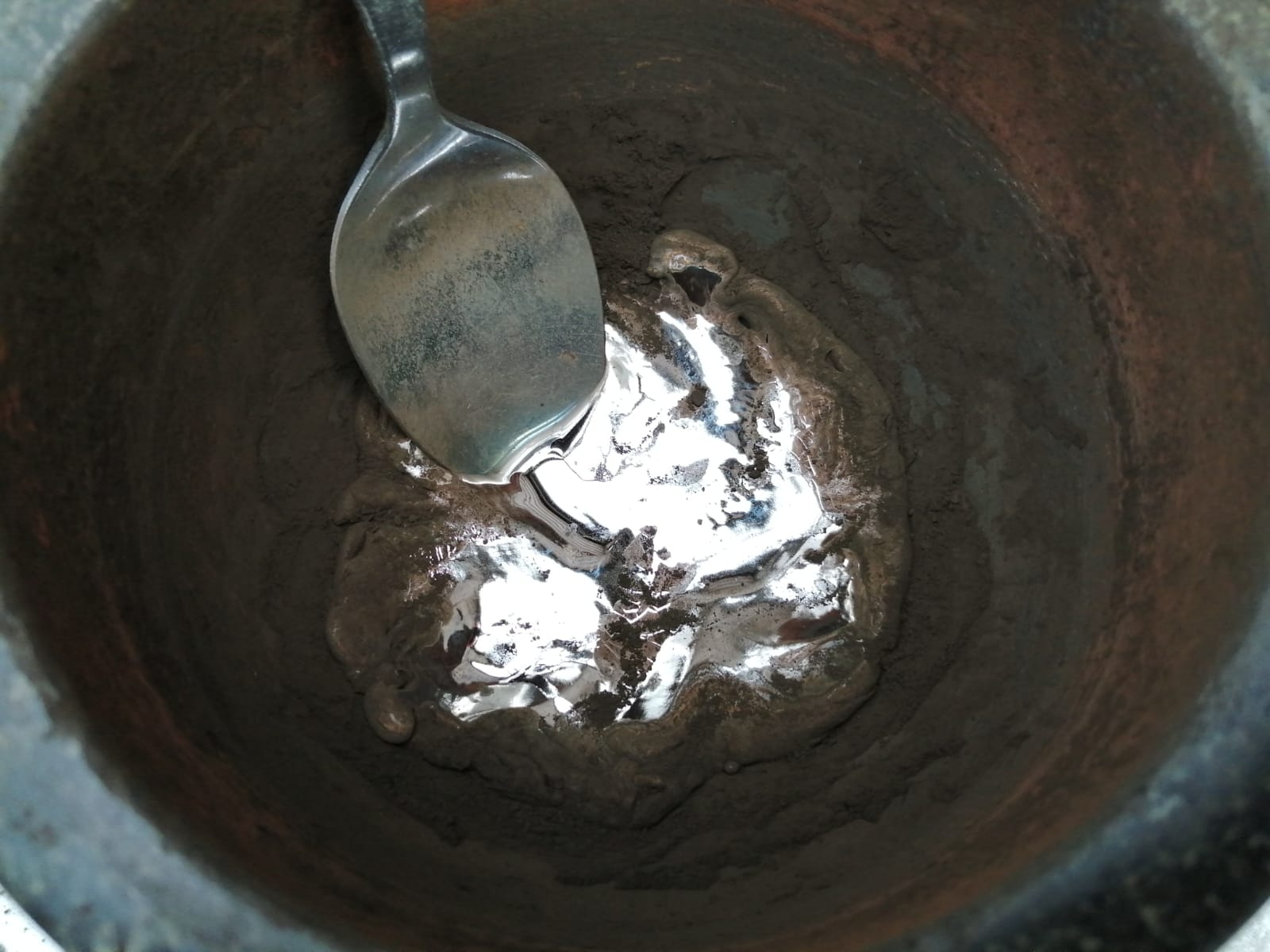 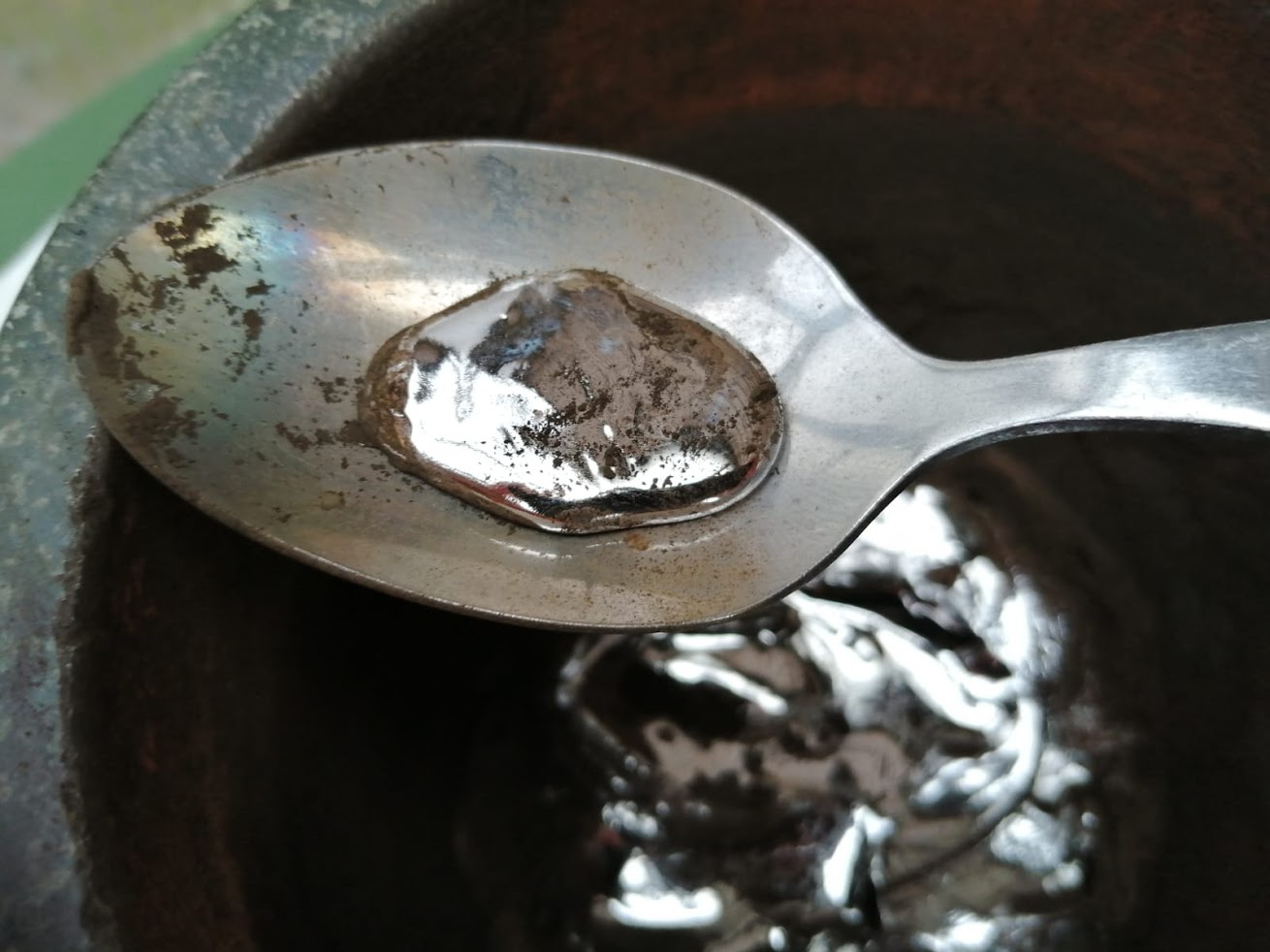 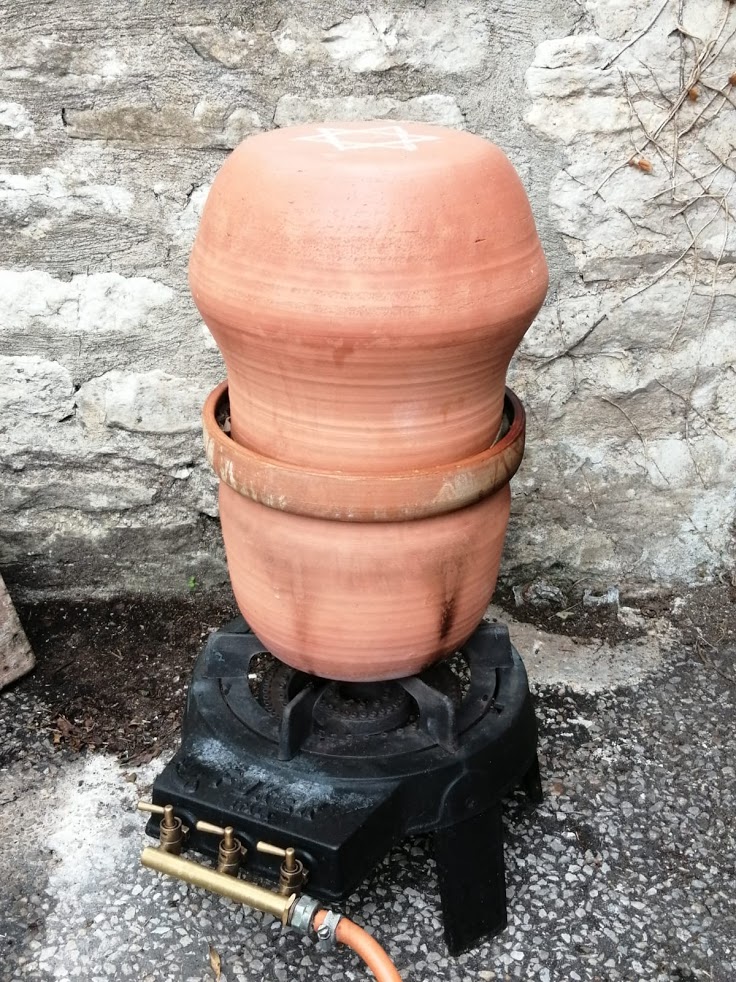 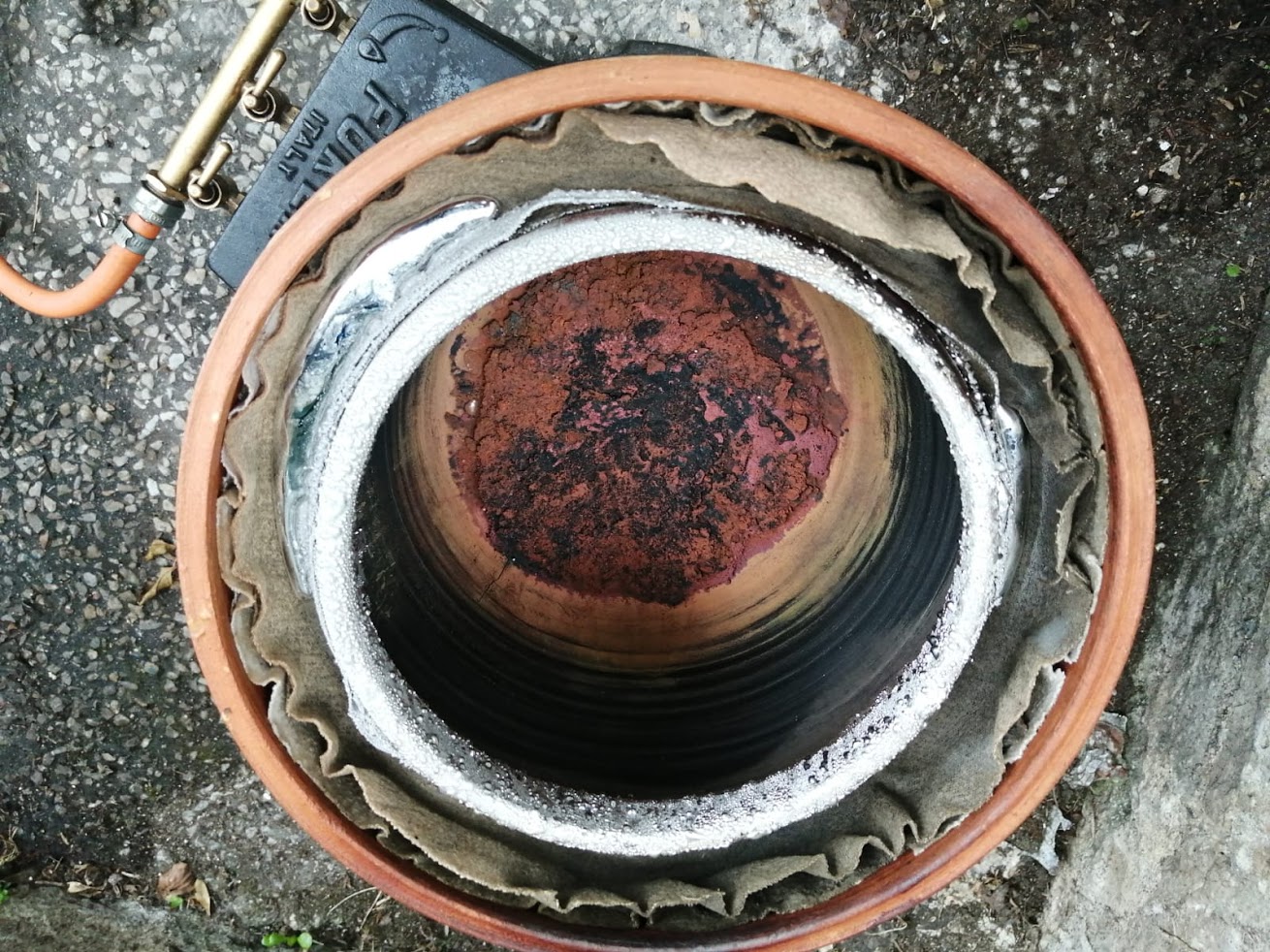 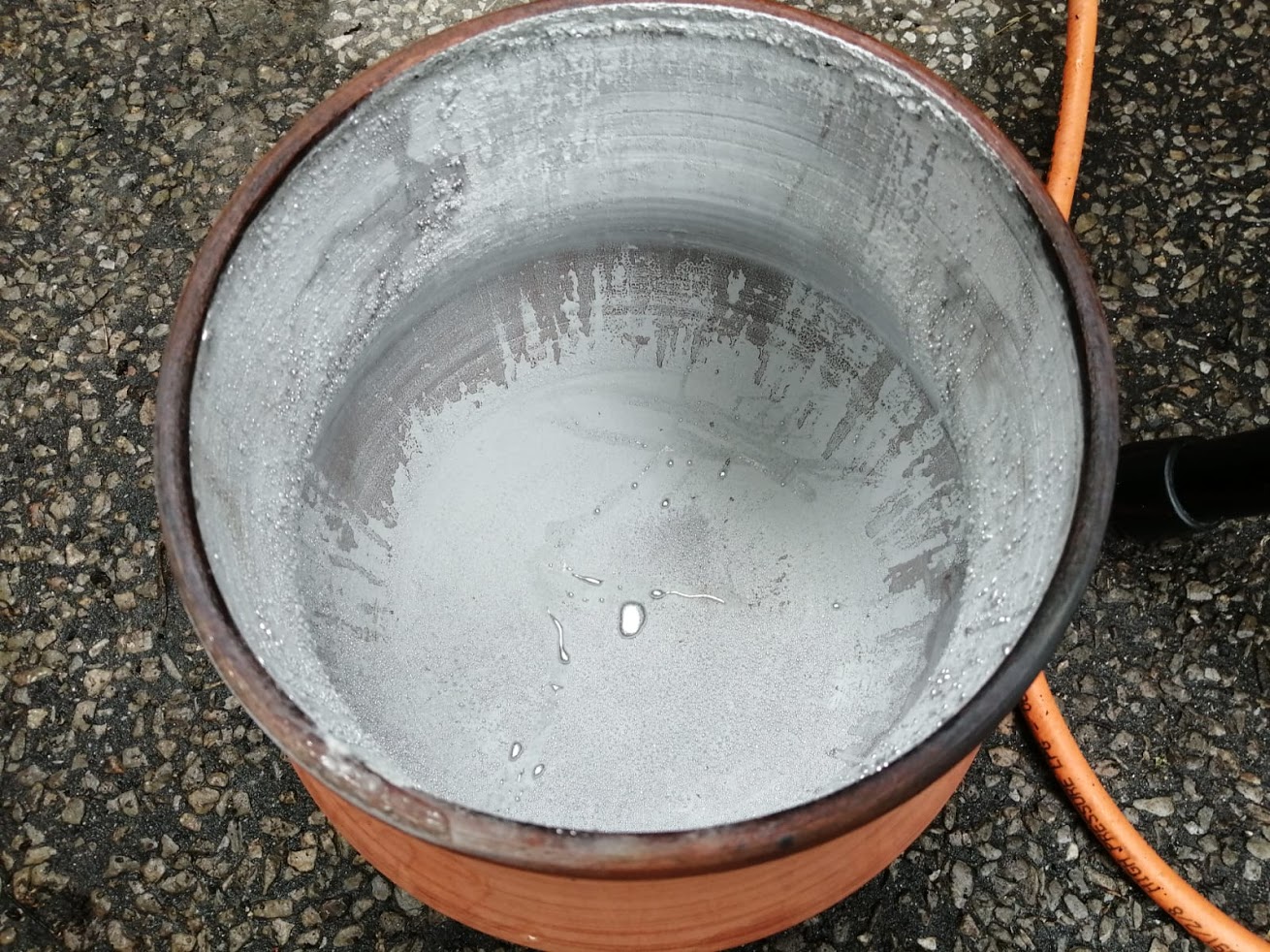