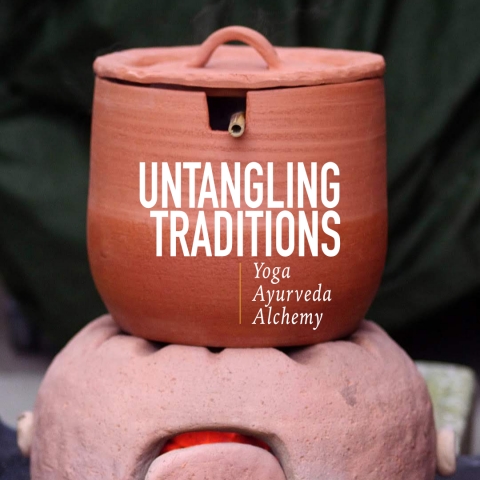 Dagmar Wujastyk introduces the second series of recreating alchemical procedures. In this series, we recreate formulations from a sixteenth-century alchemical treatise, the "Nectar Mine Light of Mercury" (Rasaprakāśasudhākara). The treatise focusses on the medicinal application of mercurials, but also contains a chapter on making alchemical gold and silver and artificial pearls and coral.

This film shows the recreation of the recipe for making pearls out of fish eyes. For more information on the experiment, see http://ayuryog.org/blog/reconstructing-indian-alchemy-making-pearls

This experiment focusses on a recipe for making copper look like gold. The video shows our attempts at recreating the recipe. It also features our behind-the-scenes discussions about the viability of the recipe and how to adapt it: our first round did not yield the result we had hoped for. Nor did the second. See the accompanying blog post here: http://ayuryog.org/blog/aurifiction-imitating-gold

This film shows the preliminary procedures applied to the materials used in the aurifiction process.

This film shows the recreation of a similar recipe for making alchemical gold from the 11th-century "Ocean of Mercury" (Rasārṇava), one of the foundational texts of the Indian alchemical tradition.

This film shows the recreation of a recipe that uses chalcopyrite as the main ingredient and does not require smelting the ingredients in a furnace. Read more about this experiment here: http://ayuryog.org/blog/final-experiment-gold-imitation-chalcopyrite

In this video, we revisit the first recipe for aurifiction, adjusting some of the ingredients and their proportions. Read about why we revisited this recipe here: http://ayuryog.org/blog/aurifiction-revisited

In this video, we show some modern and traditional methods for testing silver, using the alchemical silver bars we produced.

These videos show experiments with making orpiment ash, one of the required ingredients in the second recipe for argentifaction

SERIES 1: Indian alchemy - Rasashastra - is the craft of making elixirs from mercury. From the tenth century, Indian alchemists started composing treatises about their work. The earliest of these treatises was the 'Heart of Mercury' (Rasahṛdayatantra). It describes eighteen procedures for making mercurial elixirs. We reconstructed these procedures.

Dagmar Wujastyk and Andrew Mason speak about their collaboration on recreating alchemical procedures described in a tenth-century alchemical treatise, the "Heart of Mercury" (Rasahṛdayatantra).

This film shows the first procedure, the steaming (Sanskrit: svedana) of mercury. The purpose of this procedure is to remove contaminants from mercury. The text states: "The steaming of mercury is carried out with a sixteenth each of mustard, salt, the three pungent substances, leadwort, fresh ginger and radish together with sour gruel for three days over a mild fire." (Rasahṛdayatantra, chapter 2, verse 3)

This film shows the second procedure, the trituration (Sanskrit: mardana) of mercury with several other substances. The purpose of this procedure is to remove contaminants from mercury. The text states: "Trituration with sour gruel is carried out for three days with molasses, burnt wool, and salt, together with soot, brickdust, and mustard, each in the amount of a sixteenth part to the mercury. (Rasahṛdayatantra, chapter 2, verse 4)

The film shows how to produce burnt wool, which is one of the ingredients in the second procedure in the treatment of mercury: trituration (mardana)

This film shows the third procedure, the thickening (Sanskrit: mūrchā) of mercury. The purpose of this procedure is to remove the toxic elements of mercury. The text states: "The three inherent faults of mercury are called ‘dirt’, ‘fire’, and ‘poison’. Through dirt, it produces fainting, through fire, a burning sensation, through poison, death. Aloe removes dirt, the three myrobalans remove fire, and leadwort removes poison. Therefore, one should thicken it seven times with a mixture of these." (Rasahṛdayatantra, chapter 2, verses 5-6)

This film shows the fourth procedure, the 'raising', or sublimation (Sanskrit: utthāpana) of mercury. The purpose of this procedure is to activate mercury after it has been cleansed with aloe, triphala and leadwort in the thickening (mūrchā) procedure. The text gives this very brief description of the procedure: "The mercury, which has become completely cleansed and freed from lead and tin through trituration with this, is brought to a rise from a sour gruel decoction in a condensation apparatus." (Rasahṛdayatantra, chapter 2, verse 7)

Some of the procedures require preliminary preparations to prepare devices and substances. The text of the Rasahrdayatantra is very concise, and tells us little about the devices used. We followed instructions from later alchemical texts to construct our devices, using clay. Since clay is a porous material, it needs to be sealed before being used for the procedures. For this, we used egg tempera. The film shows how to produce and apply it.

This film shows the fifth procedure, the "letting fall" or sublimation (Sanskrit: pātana) of mercury. The purpose of this procedure is to fully remove the toxic elements of lead and tin presumed present in mercury. The text states: "Having prepared a copper paste, a condensation procedure is conducted because of suspicion of remaining lead and tin. And, thus freed of its faults, the cleansed mercury condensates." (Rasahṛdayatantra, chapter 2, verse 8)

The fifth alchemical procedure, sublimation (pātana), requires the use of copper paste (śulbapiṣṭi), but it gives no explanation of what the paste consists of or how it is made. The Mugdhāvabodhinī, a ca 16th-century commentary of the Rasahṛdayatantra, states that it is a mercury-copper paste, but doesn’t provide further instructions. The following procedure of making copper powder is based on The Siddha Formulary of India. The copper powder is used for making copper paste in the pātana procedure afterwards.

Here, we start with copper powder as an alternative to the copper sheet shown in the other video. Indian alchemical works often describe the application of 'purification' (śodhana) procedures to metals and other substances before their use in the main procedures. The processed copper is used for making copper paste in the pātana procedure afterwards.

Here, we start with copper sheet. Indian alchemical works often describe the application of 'purification' (śodhana) procedures to metals and other substances before their use in the main procedures. The processed copper is used for making copper paste in the pātana procedure afterwards.

This film shows the sixth procedure, the 'reviving' (Sanskrit: nirodhā) of mercury. The Sanskrit term nirodhā normally means 'restraint' or suppression. However, in this context, it is understood as a synonym for 'bodhana', 'awakening'. The purpose of this procedure is to reinvigorate the mercury, whose power has been subdued with the foregoing cleansing procedures. The text states: "It is rendered useless through trituration, thickening and condensation because of its weak potency. Once it has become replenished through revivification with sṛṣṭyambuja (water and salt?), it will no longer be impotent." (Rasahṛdayatantra, chapter 2, verse 9)