Yogis, adepts, experts: Who were the alchemists? 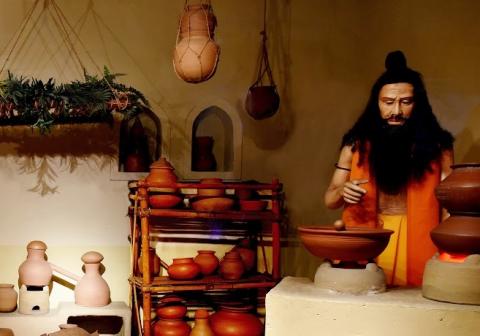 Yogis, adepts, experts: Who were the alchemists?

Most early Sanskrit alchemical texts describe the making of mercurial elixirs in great detail, devoting the bulk of their writings to it. The intake of elixirs is described as the culmination of alchemical practice with the ensuing transformation representing the ultimate alchemical goal. This transformation is part of a two-step process. It begins with a first set of transformations that concern metals: metals like lead are transformed into precious metals like silver or gold. The successful transformation of metals is then considered proof of the fitness of the mercurial elixir for the transformation of the human body. If an elixir can transform metals, it is ready for ingestion and will effect dehavedha – the transmutation of the body – as desired. What that transmutation looks like differs from work to work, and one usually finds a wide range of possible outcomes even in a single work. For example, the tenth-century Rasahṛdayatantra, the oldest of the alchemical works transmitted to us, describes perfect health, good eyesight, immortality, an adamantine body, the ability to move through the air, the ability to raise the dead, and a godlike condition as some of the possible effects of mercurials. Some of these seem to be part of a continuous development: First you get rid of your cough and become completely healthy, then you become immortal, then you become godlike. Other outcomes seem to be specific to particular recipes: You can raise the dead with the mṛtasaṃjīvanī pill. If you take the amarasundarī pill, you will be protected from all weapons. Take the “vajriṇī” pill and you become as strong as nine elephants. None of these pills is associated with transcendent goals.

But who is the one seeking and receiving transformation? Is it the same person or group of people involved in the making of the elixir? Or is it someone else? A patron? A student? A devotee? Or a paying customer? Is it necessary to go through the processes of making the elixir to partake of its benefits? Or is there perhaps a distinction between alchemical products aimed at a wider (paying?) group of recipients and products that can only be used by the person who made them? A distinction, perhaps, between more mundane products, and products that reflect a concept of alchemy as a spiritual practice in which the entire process of making and then taking the elixir is a continuum? On this point, the early texts are frustratingly elusive.

In the texts that I examined, the chapters or passages dealing with the ingestion of the mercurial elixir typically do not specify who is taking the elixir: it is an anonymous ‘he’ (sa), or man (nara, puṃs, puruṣa), and often, the person is only alluded to in the singular by the verb (‘he/one should take the elixir’). The Rasahṛdayatantra mentions a ‘sensible’ or ‘intelligent’ person (buddhi, dhīmat, matimat) who displays their understanding through judicious actions in the intake period – but also their counterpart, the ‘fool’ (mūḍha), who makes mistakes, such as eating too sour substances during the intake of mercurials. Otherwise, the text mentions a ‘person undergoing rasāyana’ (rasāyanin, i.e., the person taking the elixir over a period of time). The eleventh-century Rasārṇava similarly refers to a man (nara) attempting or experiencing dehavedha, and once to an adept (sādhaka) and to a yogi. Again, it is not clear whether the person undergoing dehavedha needs to have been involved in the making of the elixir.

Outside of the rasāyana process, some alchemical treatises contain chapters or passages on the desired characteristics of those involved in the alchemical process. And here, we encounter the teacher (guru, ācārya), the student (śiṣya), the helper/assistant (paricāraka), the expert (vaidya), and the female companion (kākinī, kīkaṇī, kāñcikācinī). The context for their being mentioned is the initiation of the student. Notably, none of these are mentioned in the context of the rasāyana/dehavedha processes.

But what about the ‘alchemist’? The perhaps closest correlate here is the ‘teacher/adherent of the mercury (doctrine)’ (rasavādin), a term that is, however, not used very often in the texts. The Rasahṛdayatantra refers a few times to a ‘yogi’ as the practitioner of alchemy and this usage is echoed in several later alchemical treatises (particularly in the Ānandakanda). The Rasārṇava refers to an ‘adept’ (sādhaka) and this is repeated both in the Rasaratnākara and the Ānandakanda. Since the Rasārṇava also mentions the sādhaka in its chapter on dehavedha (albeit only once), it seems at least possible that it envisioned the person making the elixir and the one taking the elixir as one and the same person. Other works, especially those with a more medical slant, such as the Rasendracūḍāmaṇī, the Rasaratnasamuccaya, the Rasamañjarī, or the Rasaprakāśasudhākara most often mention a ‘(medical) expert’ (vaidya) or simply a ‘doctor’ (bhiṣak). In the latter cases, the doctor would typically be administering mercurials as medicines to patients, as the later works often no longer describe a transmutation process.

Title:
Yogis, adepts, experts: Who were the alchemists?