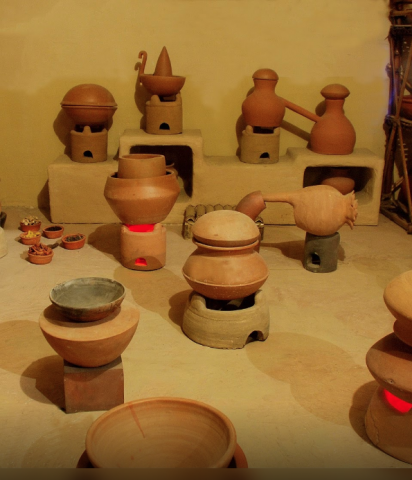 On the fifth floor Science and Technology Heritage gallery of the National Science Center, Delhi, a small diorama shows some of the instruments used by South Asian alchemists. This diorama shows a cluttered space, full of yantras (apparatuses) and ovens. An online version of the exhibit goes into detail about how these apparatuses functioned. What it does not tell us, however, are some of the details found in medieval alchemical texts about the layout and surroundings of this important alchemical space.

In addition to the lab (rasaśālā), texts mention two other alchemical spaces: the temple or pavilion (rasamaṇḍapa) and hut (kuṭi). Each of these spaces are described in detail in different texts and have separate purposes. The alchemist prepares medicines in the rasaśālā, purifies himself and the alchemical ingredients in the rasamaṇḍapa, and the appeasement of deities through the use of mantra, maṇḍala, and yantra in the kuṭi. 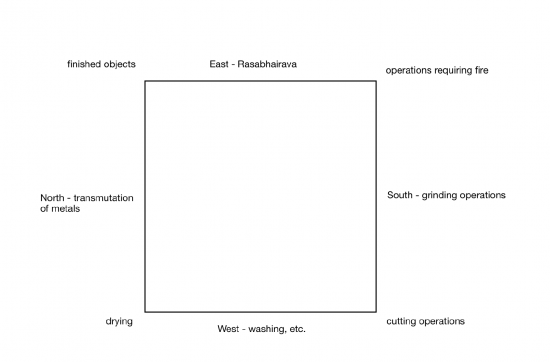 A second alchemical space, the rasamaṇḍapa, is described in the 15th-century Rasaratnasamuccaya 6.11-31. It serves as the space for initiation, purification, and meditation. Its layout differs from that of the rasaśālā in two key ways. First, the rasamaṇḍapa contains a complex maṇḍala consisting of a hexagon drawn with mercuric oxide surrounded by an eight-petaled lotus. The raw materials for the alchemical processes each have a symbolic place on this maṇḍala. (White, 1996, 258) Second, the representation of Rasabhairava moves from the East to the center of the rasamaṇḍapa.

White gives a detailed description of the reasons for the associations with the directions within the rasamaṇḍapa:

"The eastern wall of the structure is reserved for the storage of herbs and other plant matter: in the Hindu organization of space, the east is the directions whose regent is Indra, the god renowned for the theft of Soma, divine herb of immortality. To the southeast, the direction of Agni, Fire, are located the alchemist's distilling instruments. To the south, the direction of the dead and Yama, lord of the dead, the alchemist stores his oxidizing, 'metal-killing' (lohamāra) chemicals. To the southwest the direction of Nirṛti, the dread [sic] goddess of disorder, are arranged mortar, pestle, and other grinding and pulverizing instruments. Arrayed along the western wall, the region of Varuṇa, the god of the waters, are the alchemist's liquefying apparatus. To the northwest, the direction of Vāyu, Wind, are the bellows of the alchemist's furnace. The north is the quarter of the god Kubera, lord of the Vidyādharas and possessor of fabulous riches and wealth. Here are located coloring (rañjana) agents, the reason for this being that half the alchemist's art of aurifaction (or aurifiction, counterfeiting gold) lay in the tinting of base metals with amalgams of gold and mercury. Lastly, the northeast, the direction identified with that form of Śiva known as Īśāna, is consecrated to the use of mercury as agent of transmutation (rasavedha)." (1996, 259)

The arrangement differs slightly from that found in the rasaśālā, where we find grinding in the south rather than southwest and transmutations of metals in the north rather than northeast.

The last alchemical structure is that of the kuṭi, described in the 12-13th century Ānandakanda in chapter 21. It is within this hut that the appeasement of deities take place. The description of this space is unlike that of the other two, with the majority of the description dedicated to the intricacies of the mantras, maṇḍalas, and yantras (here referring to diagrams rather than apparatuses) used within the hut. Here we find a description of Bhairava, who resembles a black cloud, has a flame mounted on his head, curved fangs, and holds a shovel and an ax. He wears serpent earrings and is adorned with a sacred thread also made from a serpent. He has a small bell, a bald head, and is dirty. He is naked and has claws on his 10 hands, which hold a drum, hook, sword, and trident. With the moon in his left hand, he grants wishes. He also holds a serpent, noose, rings a bell, and holds a liquor glass. He conveys fear. He is covered in black ungents applied to his body and abounds in mālās. He causes all diseases to perish. (21.12-16) Through the utterance of mantras, the writing of mantras on maṇḍalas and yantras, and the visualization of various deities, diseases are cured and pain ceases.

Both the rasaśālā and kuṭi should be near a medicinal garden, which is described in Ānandakanda 2.22-37. In addition to medicinal plants, the garden should be near lakes and cold water and attract a variety of birds. The description of these four alchemical places indicate a permanency to the structures and help us begin to visualize the setting in which the alchemist works. 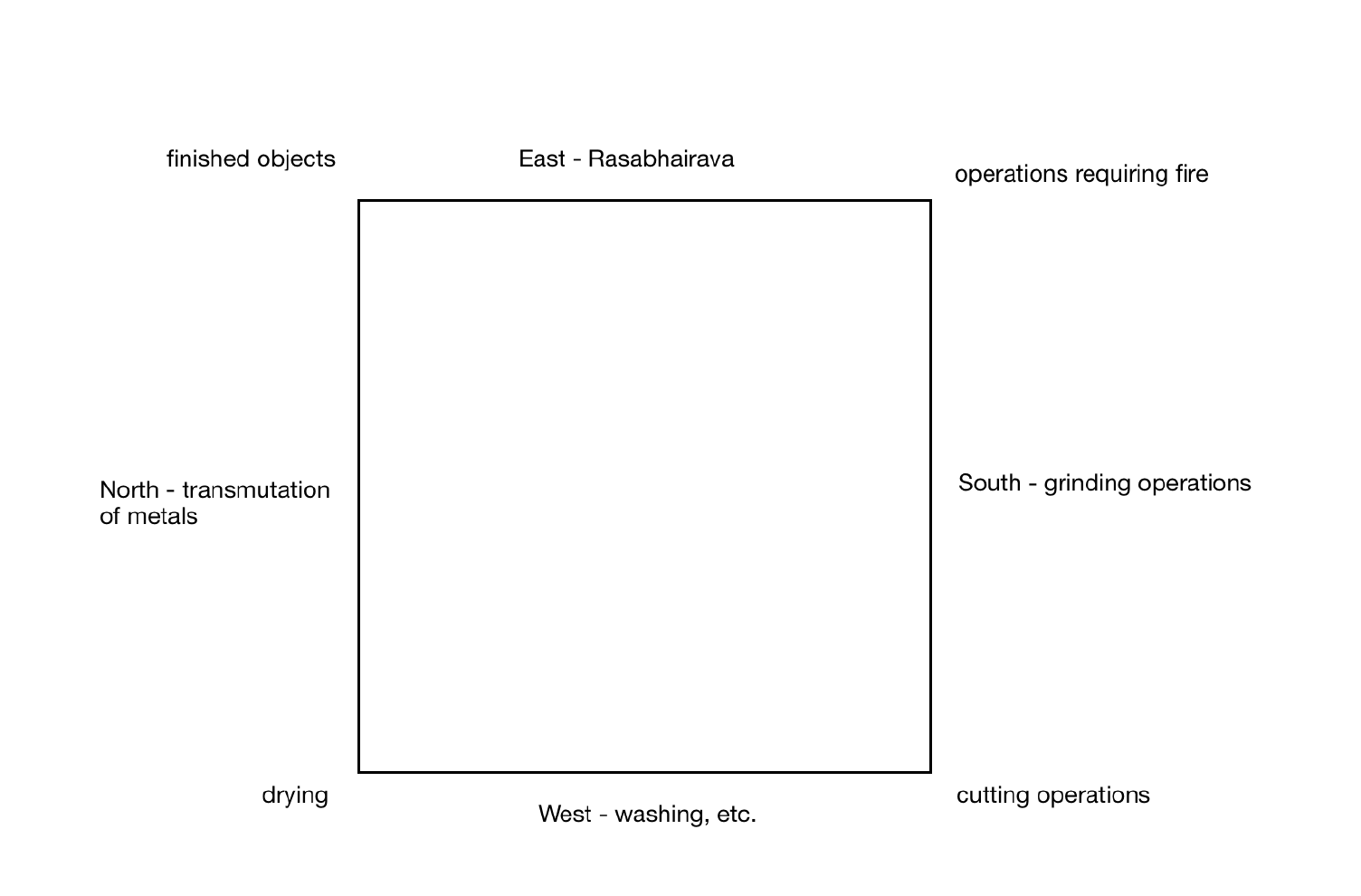 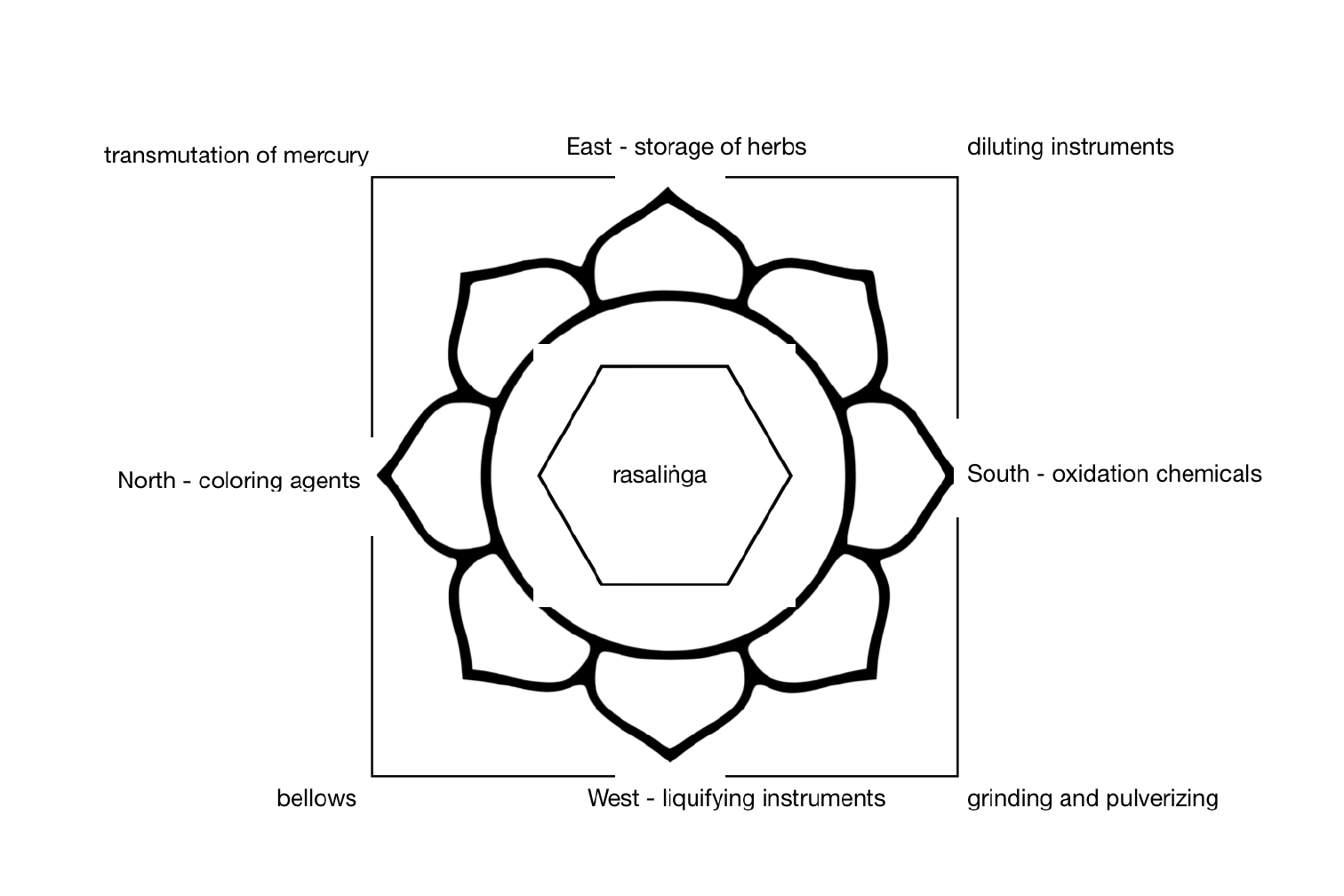