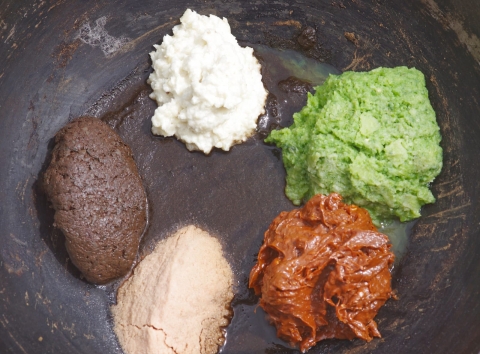 In the sixth procedure, the mercury was supposed to regain its power, which had been suppressed through the earlier cleansing procedures. With flaws such as contaminants addressed and the potency of mercury restored, the seventh procedure, called niyamana - "fixing", turns to an inherent characteristic of mercury that is also considered a flaw: its unsteadiness (capalatvam).  The Rasahṛdayatantra (chapter two, verse ten) describes this procedure as follows:

When it has properly regained its potency in this way, the unsteady (mercury) will subsequently be fixed through a steaming with betel, garlic, salt, false daisy (bhringaraj), spiny gourd, and tamarind.

We assume the reference to steaming means this procedure is executed with a 'swing-device', a dolāyantra, and that the ingredients are mashed together into a pouch that then holds the mercury. Usually, steaming is done using sour gruel, i.e., fermented rice water. However, since it is not mentioned here, Andrew opted to make decoctions out of false daisy (bhringaraj) and tamarind for the steaming liquids. We had to substitute one of the ingredients: spiny gourd, which was just not available. Instead, we used bitter gourd.

All of the ingredients are crushed and mashed together to be formed into a herbal pouch into which the mercury is then placed. As in the very first procedure of steaming (svedana), the herbal pouch is placed in fig leaves, and the leaves, herbal pouch, and mercury are wrapped in cloth and then hung over, or rather, into the liquid in the swing-device. Andrew took inspiration from Dr Jinal Thakkar's beautifully sown fig leaf pouch and produced one of his own. 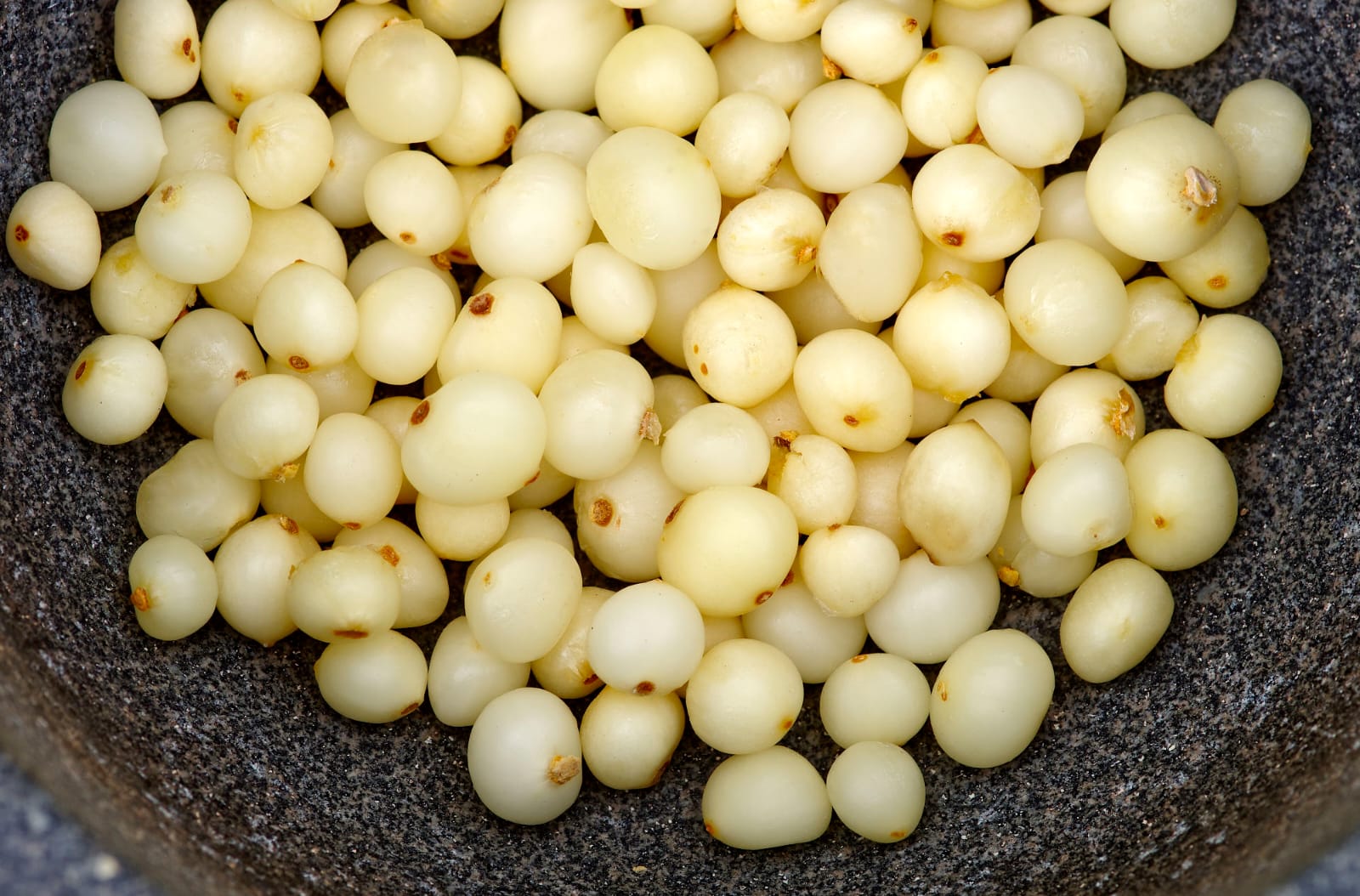 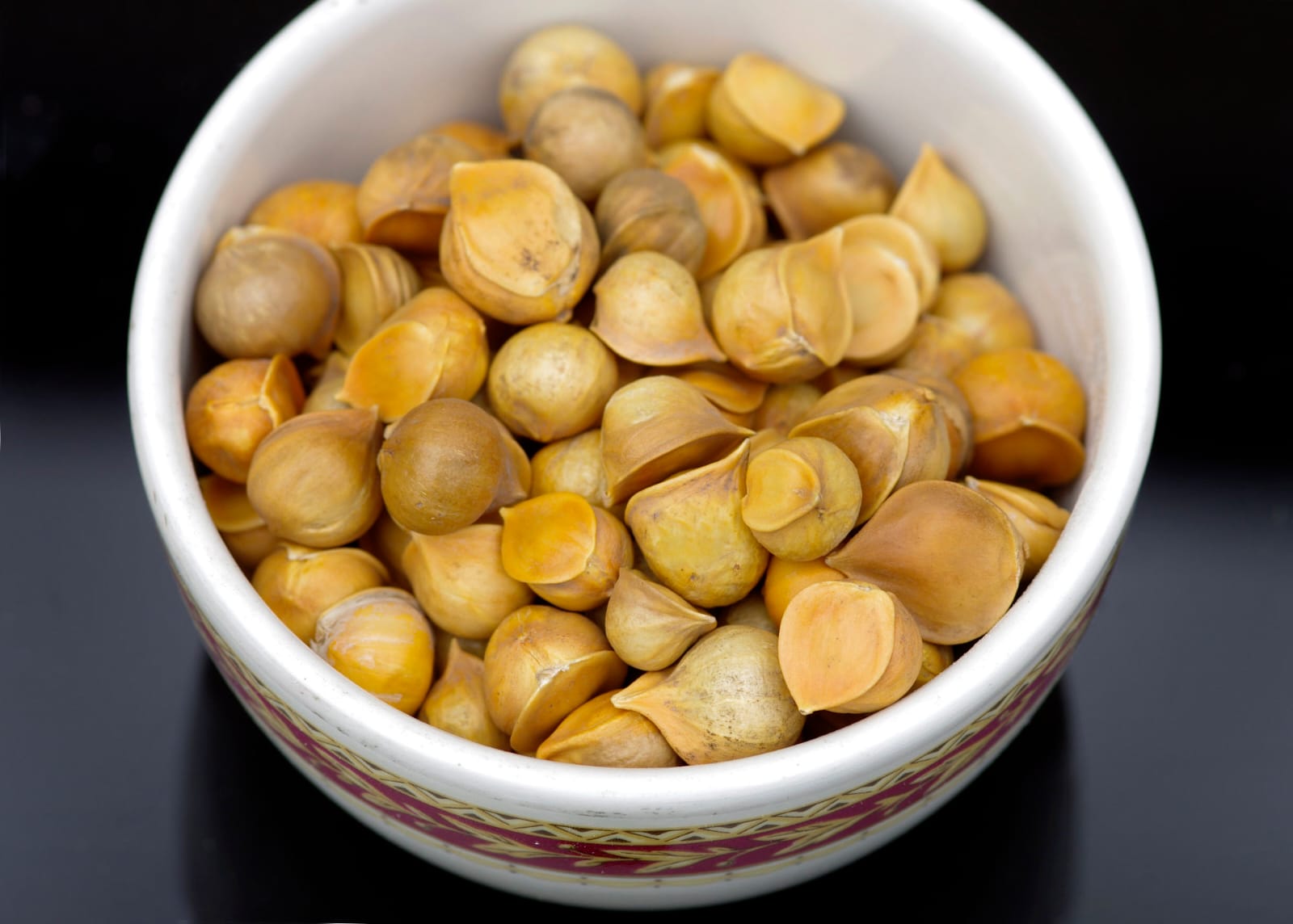 Kashmiri garlic, peeled and unpeeled. The cloves are crushed into a paste. 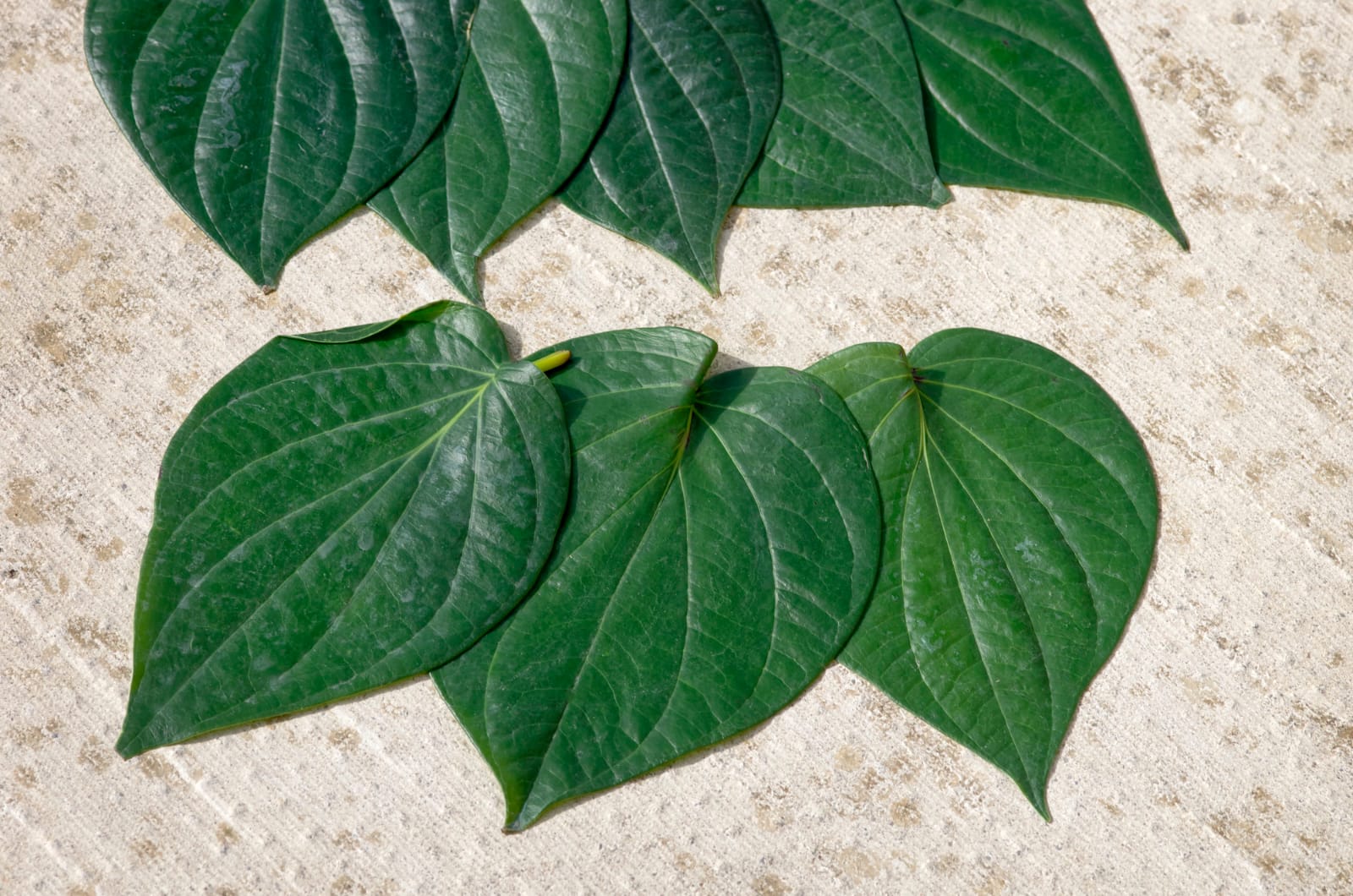 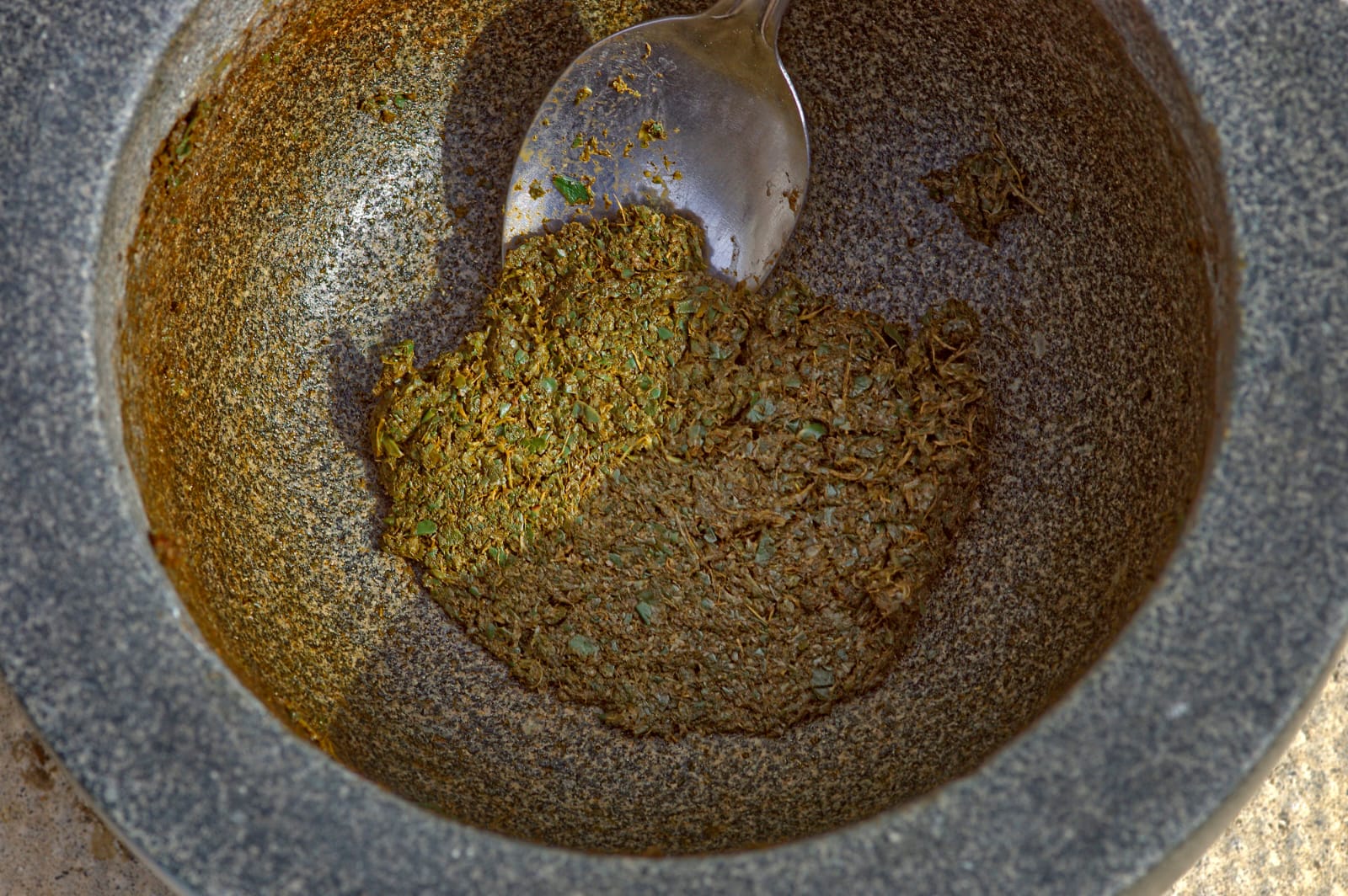 Piper betel leaves, which are then crushed and made into a paste. 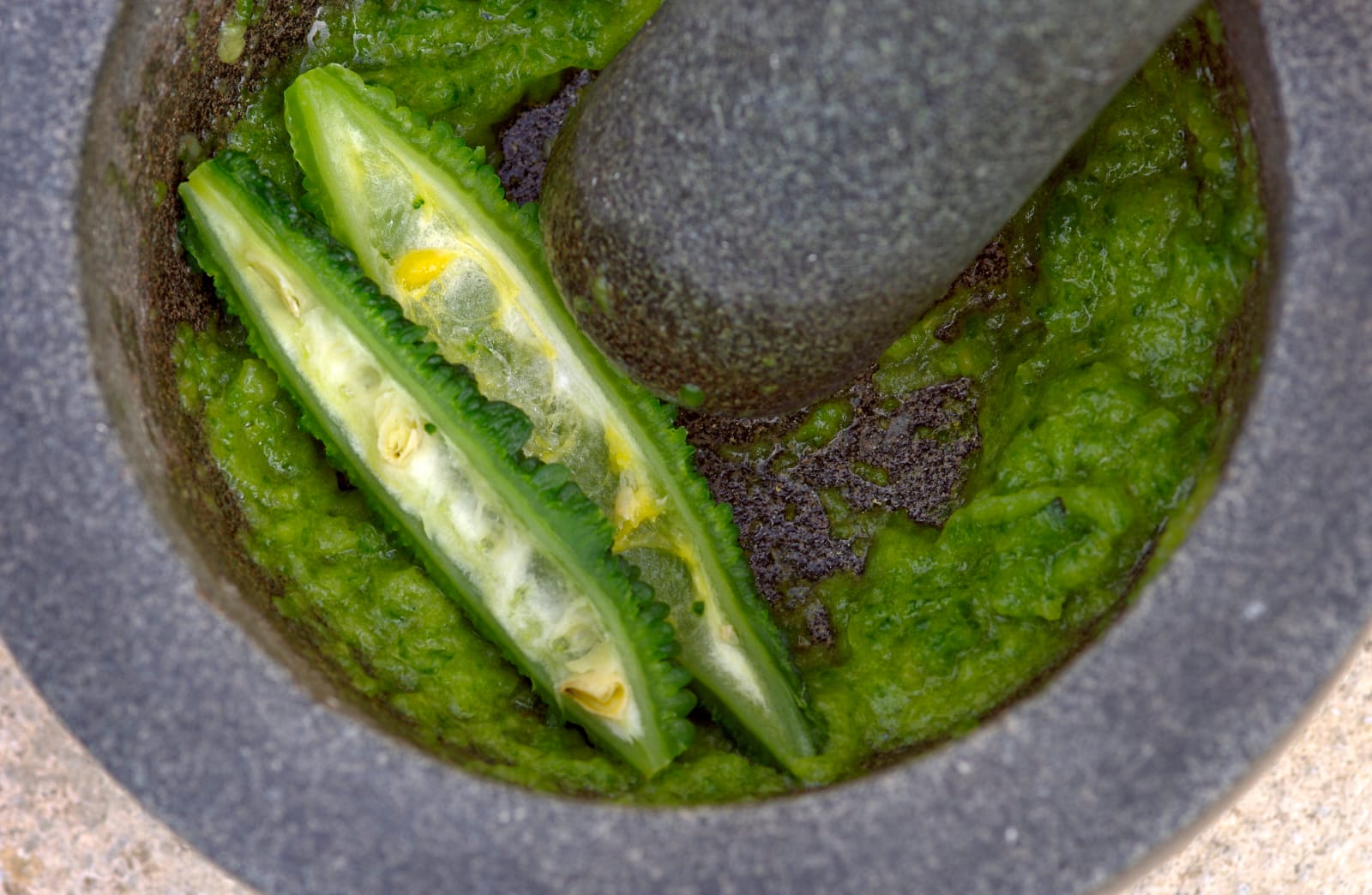 This should have been spiny gourd, but we only had bitter gourd. 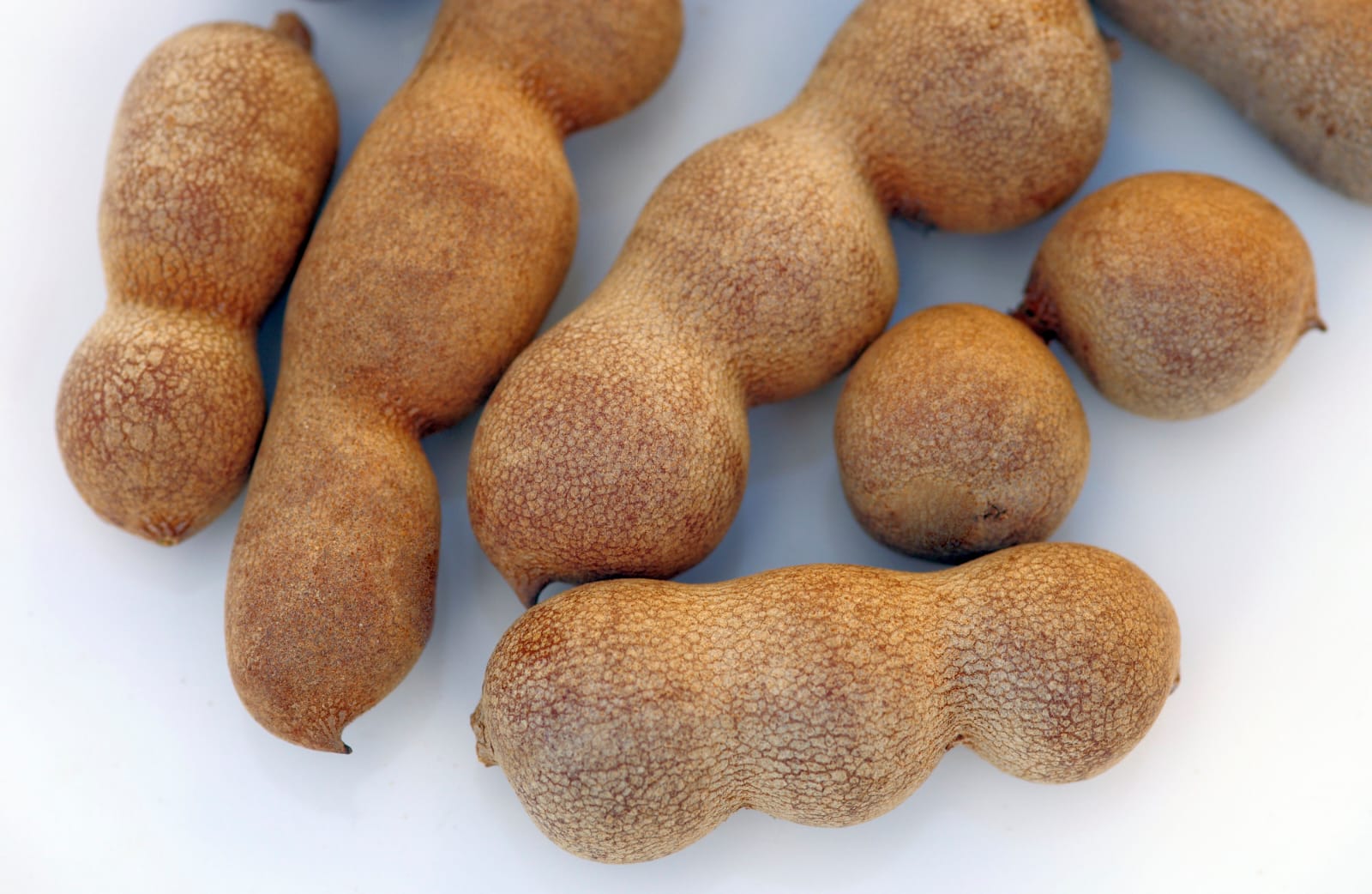 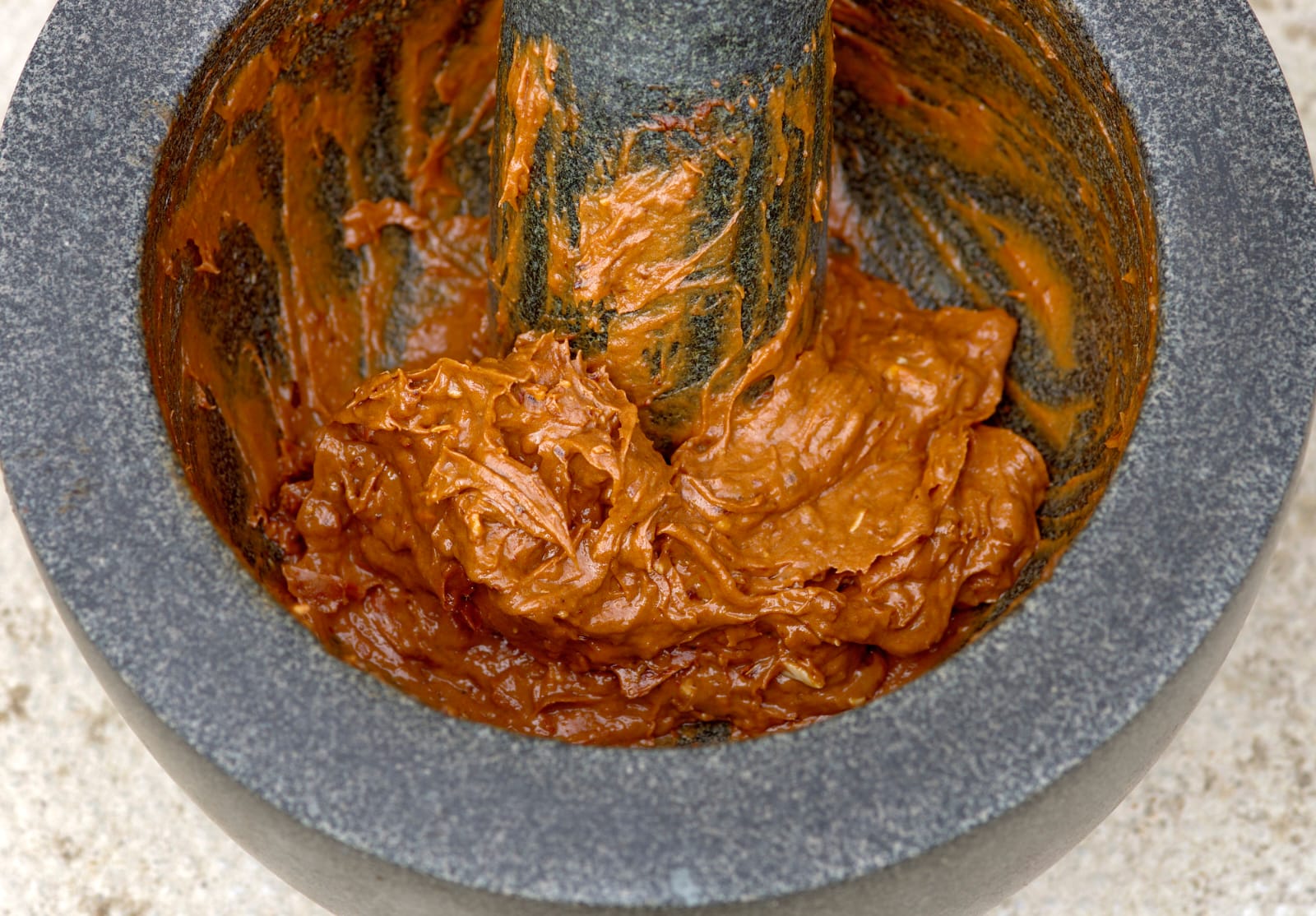 Tamarind pods. The flesh of the tamarind fruit was pulped for the herbal pouch. 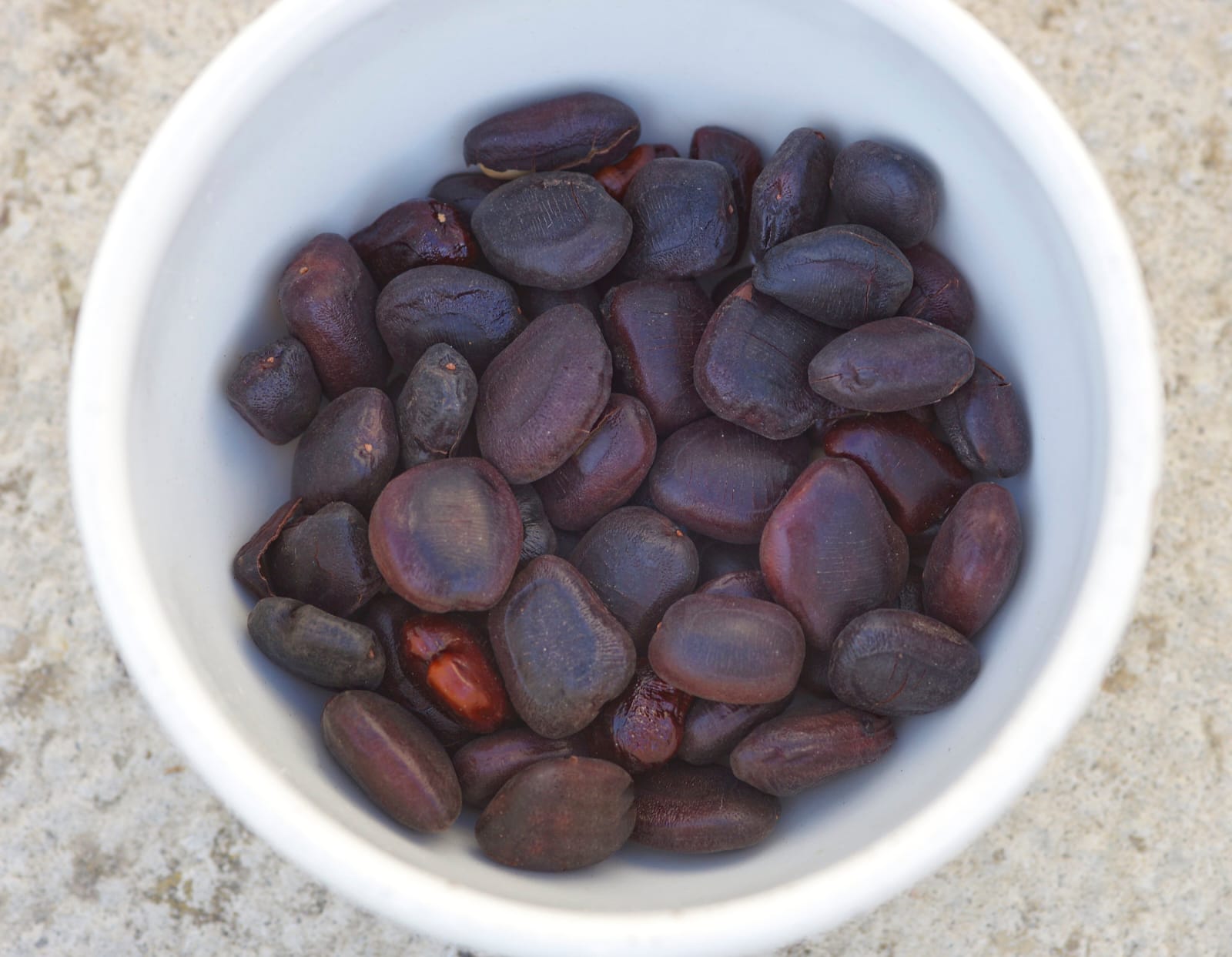 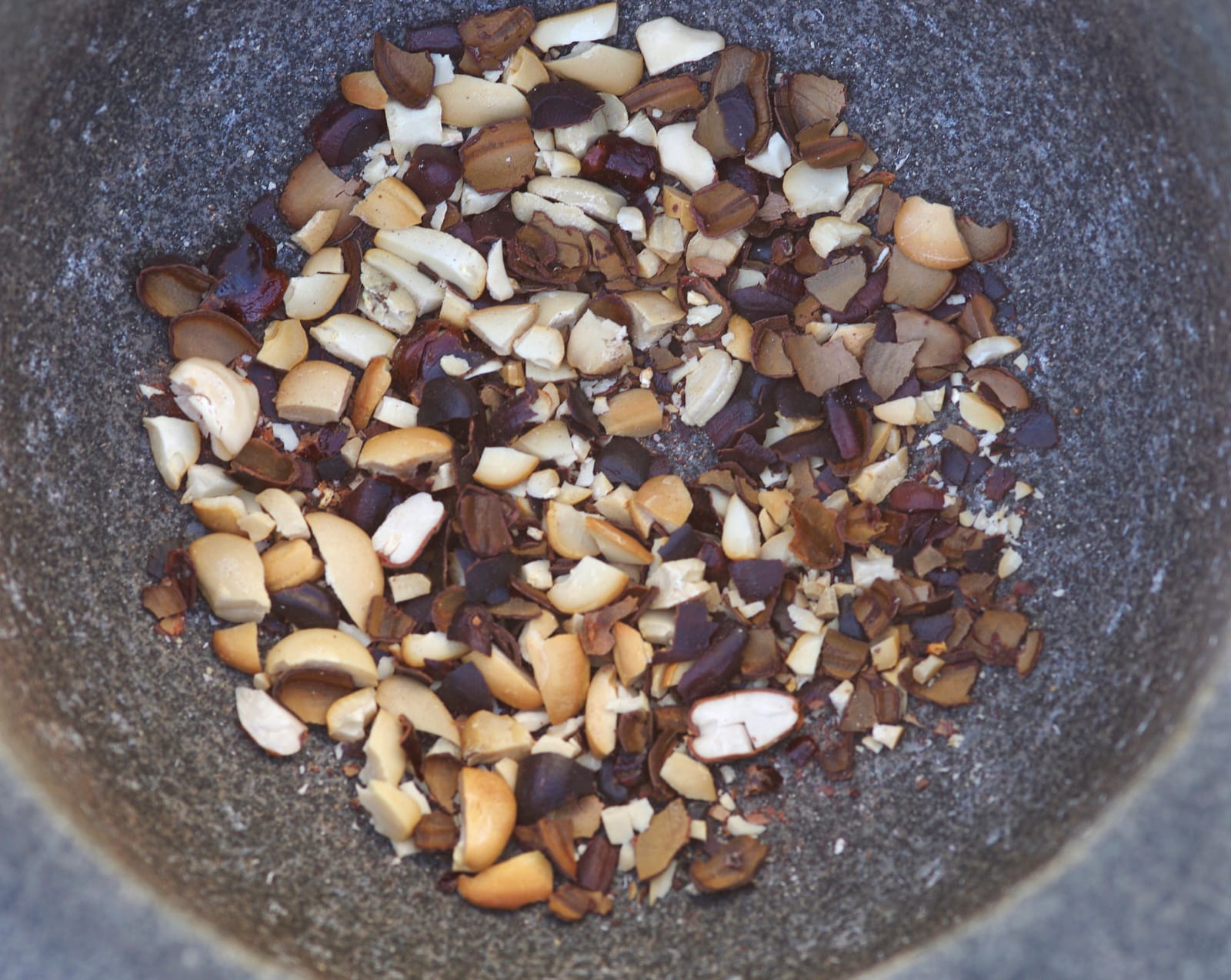 Andrew used tamarind seeds to make a decoction for the steaming liquid. 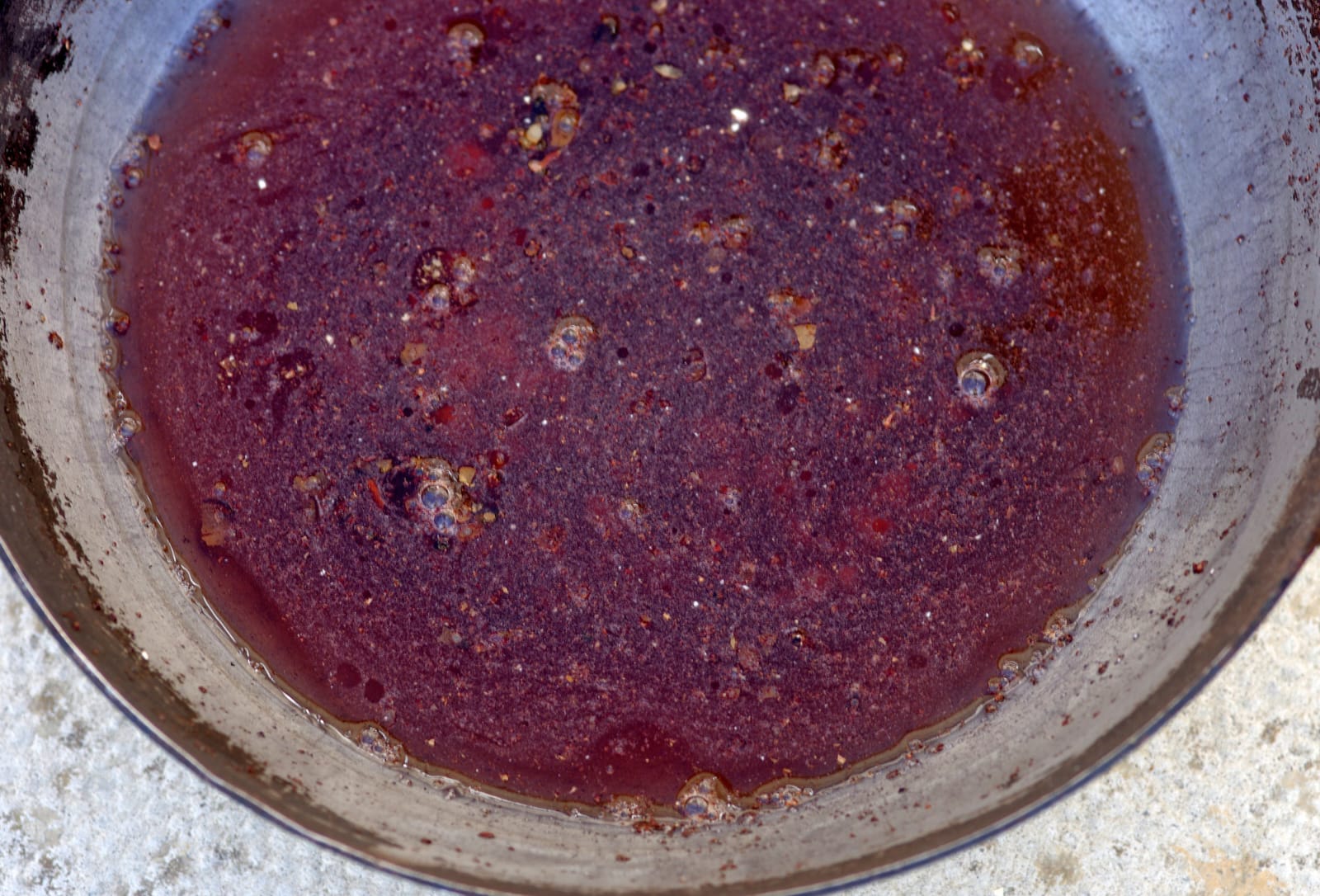 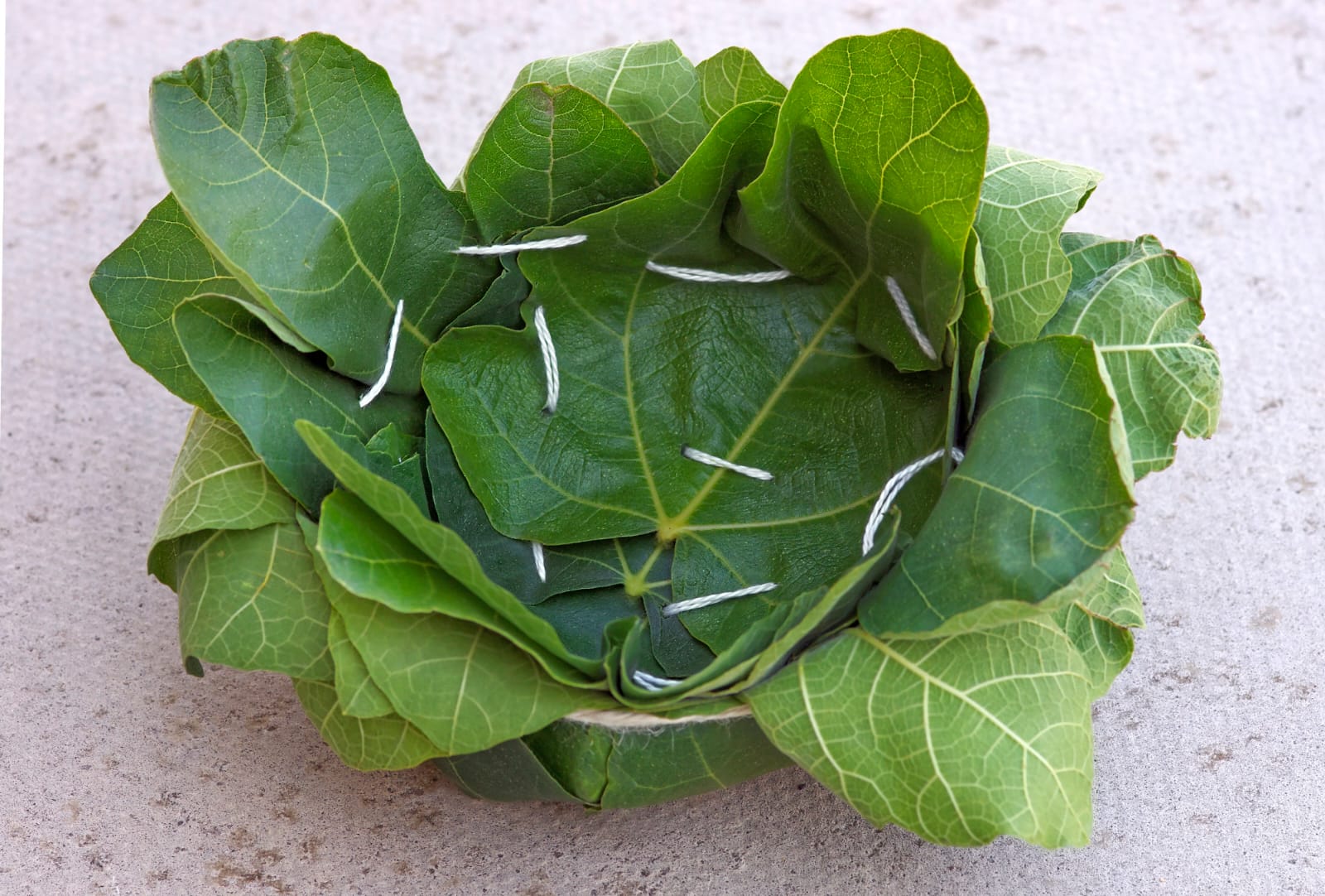 The fancier version of the fig leaf bowl. 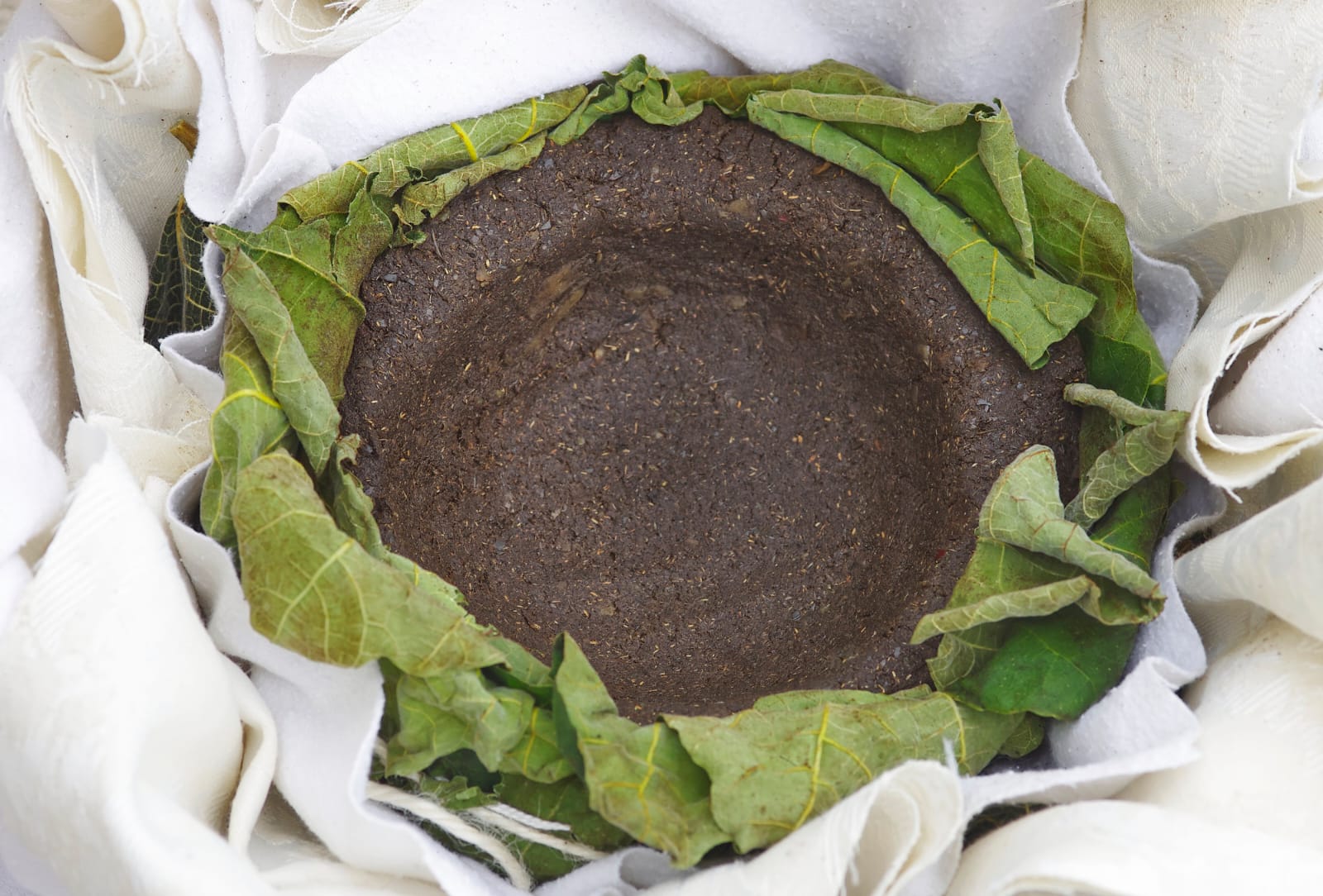 The herbal mixture is pressed into the fig leaf bowl. 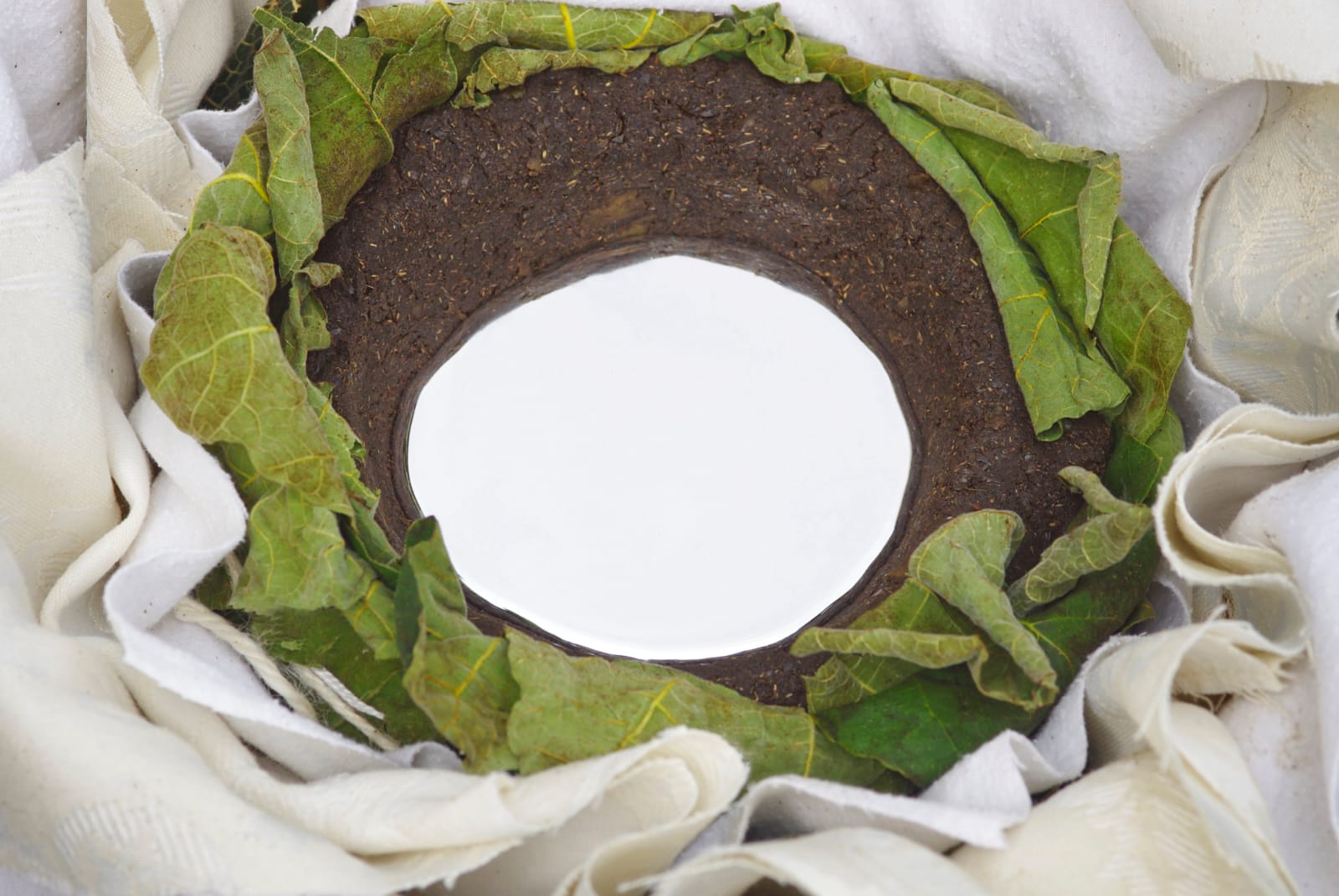 The mercury (which has by then been put through six procedures) is poured into the pouch. The cloth is wrapped around to form a bolus, which will then be hung into the swing-device. This apparatus could also be called a 'hammock-device', as dolā means swing or hammock. The cloth acts as a kind of hammock for the herbal paste and the mercury. 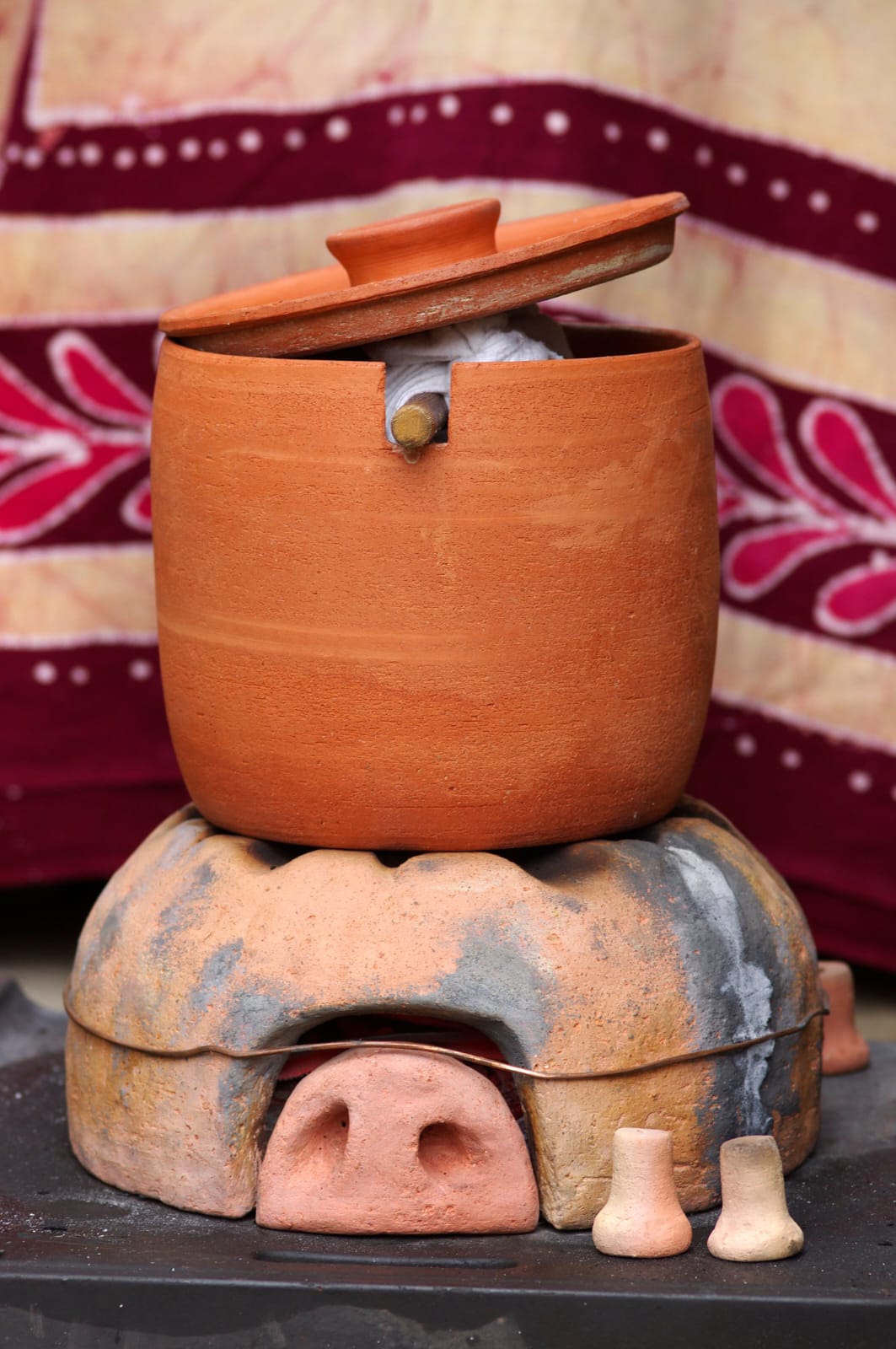 The steaming takes place over three days, and Andrew noted that one uses a very large amount of charcoal for this, and needs to refill the stove very often.

The mercury that is retrieved from this procedure does not look any different from before (after cleaning). Just from looking at it, one cannot gauge whether its properties have changed. I was expecting some visible change, perhaps something similar to the change during the trituration and subsequent thickening procedures, where the mercury became paste-like. But what is the unsteadiness of mercury that is addressed in this step? Is it its quick movement when poured or stirred? Is it perhaps its evaporative rate? Or its boiling point?

The prepared mercury still moves as swiftly as before and it seems just as liquid. As for its evaporative rate: we do not have the equipment to test this. Andrew is hesitant to try anything in regard to its boiling point, as any further procedure could mean more loss of the mercury through evaporation. As it happens, of the roughly 2000 ml of mercury Andrew started with, we are left with 1300 ml at present. This is actually not bad: Dr Parth in Pune noted that his loss of mercury in the procedures was much higher.

Another possibility that we have to consider is that we may have got it wrong at this stage. We have substituted quite a few ingredients by now, and have improvised parts of the procedures. It is possible that the mercury would look quite different now if the author's intentions had been fulfilled. Dr Parth mentioned that in one of his experiments, the mercury had gone bubbly in the sixth procedure. In the seventh, the mercury returned to a more normal state. It is difficult to know the meaning of this step without any method to check its success. But none of the alchemical texts describe a test of successfully implemented 'fixing' (niyamana). So we will press on to the next, and for us, last procedure: the stimulation, or 'kindling' (dīpana) of mercury.

Here is the film of the seventh procedure: