Krishnamacharya on yoga as indigenous medicine 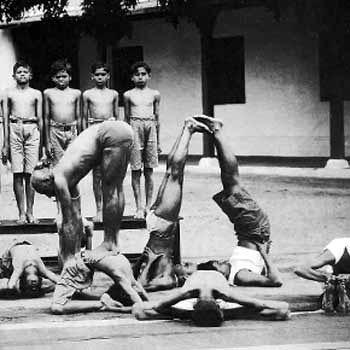 In 1946, on the eve of full independence from Britain, the Government of India announced the establishment of a committee to recommend necessary steps to ‘improve facilities for research and training in indigenous systems and generally to increase their usefulness to the public’ (p. 9). The committee began by drawing up several sets of questionnaires to survey medical practitioners of all persuasions throughout the country, as well as provincial governments, teaching institutions and pharmacies on the subject of medical provision.

In the end the committee took oral testimony from 322 practitioners of various forms of medicine and summarized the oral testimony in an appendix to the report. There are quite a few interesting mentions of yoga in this report (published in 1948), emphasizing how yoga’s status as a health intervention in mid-twentieth century was in a period of exploration and transition.

The committee spent two days in April 1948 taking oral evidence from people in Mysore – and this included an asana demonstration and interview from the resident director of the Yogashala at the Jaganmohan Palace, Mysore:

Shri T. Krishnamachariar (sic.) of Shri Yogasala, Jaganmohan Palace, Mysore, gave a demonstration of Yogasanas and Yogic methods of treatment. The following are the questions asked and answers elicited from him:

Q. What are the advantages of Yogic treatment over other methods?

A. The Yogic methods of treatment generally relate to Asanas. The objects for which the Asanas are practiced are generally

i) to preserve health (Arogyam) and to prevent ill-health.

ii) to secure light and free movement of limbs (Angalaghavam) and to make the body keep light.

iii) To obtain freedom from injury due to extremes of heat and cold and to withstand the ‘duals’ (Dwandwa) such as love and hate, pleasure and pain etc.

But the real object of practicing the Asanas, he said, is to secure a posture suitable for meditation.

Q. What diseases do you treat by the Asanas?

Q. How do the Asanas act in these diseases?

i) Samyoga – by promoting growth,

Continuing he said that by proper control of inhalation and exhalation or by what is called Pranayam, the action of the endocrine glands is stimulated or depressed according to the particular kinds of Asanas practiced. We have also what is called Yoga-Vinyasam or gradation of Yoga-Asanas. According to the capacity and vitality of the subject, the different kinds of Yogic exercises are prescribed:

a) Exercises in lying postures for the sick, weak and debilitated;

b) Sitting exercises for the moderately strong;

c) And, standing exercises for the strong and healthy.

Demonstrations by several persons of different ages and strength in a military style like drill are to be discouraged. Although in the demonstrations given by several boys and girls, the methods of military drill are adopted, regulation of breath is most important for all these postures.

Q. Is it a new method of yours?

A. No. They are of Patanjali.

iii) Viloma – converse direction to both (i.e.) the opposite direction.

In performing the Asanas, the action of the muscles in various directions should be carefully observed and in order to counteract any undue strain on any part of the body the converse processes are also to be practised. One particular Asana is to be considered as the converse of another.

Report of the Committee on Indigenous Systems of Medicine Vol. II Report and Recommendations Published by the Ministry of Health, Government of India, 1948, pp. 98-100.